I have noticed some flashing text in the block drawer in version 3.54.2, and sometimes double tapping doesn’t show the [paste | help] options as expected.

@Spy_Guy_96 I finally found a way to prevent extra enemies from sometimes appearing in the corner after the player respawns.

Under player, when I get a message: reset, set Disable Spawning to 1, then after the repeat 2, wait 0’s, set it back to 0 (if you do this too early, you’ll have the same issue you’ve been having. Do it too late, and the other enemies will look weird (not normal).

Then, in the tiles where it sets the enemies’ parameters, add a check to see if Disable Spawning is 0 before spawning them.

I have definitely worked on my organization!

Games get deleted when exiting them

Didn’t show on my phone either

Yeah I asked about the web because the web reloads drafts instantly whereas the phone version requires you to quit and relaunch the app to refresh the drafts. But you said it didn’t show there either

Oh wait I just checked again and since I made a ton of empty drafts today it got kinda dug up in there but it’s actually there. (The previous save that I though got deleted too) So it was actually just one save that got erased. So sorry if that messed things up!

@Tri-Angle, your existence exists in my diep.io tanks game!

@Tri-Angle, the Octo Lord has been born! 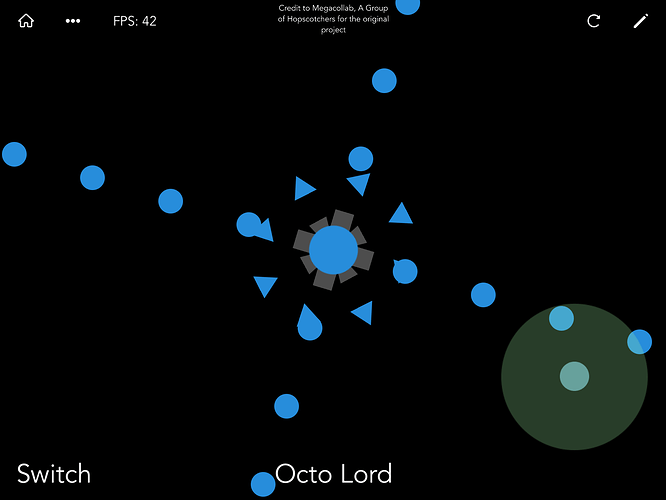 My editor will have some quick actions (modded player only)

I just realised I changed my username on hopscotch but it still shows as my old username on my profile, does anyone now how I can update it?

So I have been stuck on a problem that I can’t find a good solution for. I do have a solution but it’s not very good…

So basically, in hopscotch, when you have a number with 0’s in front, hopscotch automatically deletes those 0’s.

But the thing is, is that in a project I’m working on, I have a variable, and this variable is supposed to store a number. And this number often has 0’s in front.

This usually isn’t an issue as hopscotch automatically removes 0’s in front of a number (which is what I want), but this doesn’t happen with negative numbers.

The fact it doesn’t remove the zeros from 00-56 automatically makes sense as the negative sign is also known in string as a hyphen. The only ways to get rid of the zeros here is to do it manually.

Go to: preferences (click your pfp at the top of your screen), then go to profile, then scroll down until you find the Hopscotch username section. It’s also where you would go to change your bio.

That doesn’t work as in my case the negative character can be in different positions in the string, and the string can be different sizes.

Then there’s no way to do it. Unless you want to do frame recursion to search for the negative sign in the potentially huge string (which can cause crashes if the string is very very large).

It would be very limited, and after a certain point it’s no longer possible to do it in one frame.

method 1:
use ThinBuffaloSr’s search char algorithm (the efficient algorithm, plus you can use it anywhere else in your code as much as you wish)

method 2:
import Awesome_E’s secret blocks
write this in your code

both methods are instantaneous