Also, thanks for noticing the speed bug, didn’t even realise lol

Plot Twist: I’m making the template so you don’t have to code so much every time you want to make another platformer like your latest.

What should I add to make the template more complete. I’m basically just adding the stuff that would be in every platformer (so the others would just need to add animations and sprites).

Honestly, I like to start over from the beginning every time I make a new platformer. It’s easier for me to find optimisations I would have never found otherwise. It may take much longer than using a template, but in the end it’s worth it.

What should I add to make the template more complete.

Move all of the code to its own scene, not the starting scene. You don’t have to and you could make it work, but its honestly much beter that way.

I can add a second scene, then easily re-order then via the project builder…

Honestly, I like to start over from the beginning every time I make a new platformer. It’s easier for me to find optimisations I would have never found otherwise. It may take much longer than using a template, but in the end it’s worth it.

When I want to optimize code, I check to see if any of the code could be simplified…

What kind of optimizations do you think is needed in your current platformer setup?

Definitely something with enemies. They are currently the greatest source of lag, and I feel like I can optimise them a bit.

How many enemies causes lag for your project on your end? I can do a stress test for my template.

On my device, It takes around 60 frogs before the game start to lag (it’s only a very small slow down) and it takes 140 frogs for the frame rate to reach 30.

It took 165 enemies to drop to 30 FPS on my template (on my device), but that’s only because I have less collision types, and because my iPad is very powerful.

Also, who is going to clone 140 enemies in one location?

Well you don’t necessarily need 140 enemies to spawn 140 clones. For example, Dino spawns a fireball every few seconds and that fireball spawns particles.

I toned down the particles a bit before release, but before that 1 Dino could easily take up 10 clones total! So you would need 14 dinos to reach that number (since 140/10 = 14) though that’s changed now, so you’ll need more dinos.

Additionally when an enemy goed offscreen, it goes into a state where it can’t move or shoot fire, but it’s still loaded for a bit until it’s ~500 pixels extra offscreen (if I remember correctly lol)

Coins also spawn particles as well but not as many, I think a coin takes up 3-4 clones at most.

Now I think about it you could probably get a performance boost if you make a separate object for particles, as particles now run through the same code as enemies. Which is laggy

Not that it’ll ever reach that number… 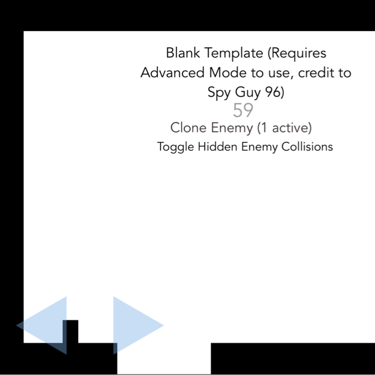 Did that enemy get smart all of a sudden? Nope, they’re just colliding with an invisible tile that only the enemies can see. Tap “Toggle Hidden Enemy Collisions” to view them.

Using this, you can make the enemy avoid holes, spikes, etc.

Question of the Month

What was your favourite time on the forum?

I just get soo nostalgic thinking about it

The forum felt like a comfort, a relief from the worst few months of my life I cant go into much detail aout that :p

I think a ( ) contains ( ) block would be useful in Hopscotch (and no, it wouldn’t be the exact same as the matches block). This would be similar to JavaScript’s includes function.

It would basically be the case sensitive version of the matches block, but without the RegExp capabilities.

Added a new enemy type: Non-Smart (was originally gonna be “Blind”). Unlike the other enemy, they can’t see the hole (nor the special tile) in front of them and will fall right in. (So basically like every platformer with enemies you ever created, lol /lh)

Tap “Spawn Non-Smart Enemy” to spawn one. They are slightly shorter than the other enemy, and lighter in color. They are also slightly slower…

@Spy_Guy_96 this is basically my first step into enemy AI.

This only works with variable substitution, btw.