And the fact that potions are disabled in the challenge levels make it even harder.

I kinda found out about that when I somehow dodged Bear who was right below Raccoon (with a broom).

Your game literally puts mine to shame, and I haven’t even started mine yet.

Also, your Level Editor somehow let me in without using 10 seeds, lol. The way you add / remove a section of the level is impressive on its own.

I also pretty much figured out the AI of each enemy

I also saw that some of the design was inspired (somewhat) by Super Mario Bros. 3 (the random coin goal).

Also, your Level Editor somehow let me in without using 10 seeds, lol.

You and awesome_E have special access to the level editor:)

I didn’t see that coming…

Imagine having to beat the entire game in a row without taking damage, nor using potions. Now that would be a real challenge (and you would have to delete the save if you got defeated / fell out of the world).

I still need to figure out what enemies I’m going to make. A lot of them will probably be inspired by the enemies in Appel from Scratch…

regarding my menu design, is there anything you think I should change?

If you’re talking about your star link platformer, I think the menu design is pretty good.

I’m talking about the game I’m working on: When Worlds Collide.

I might even do a do-over in order to use as little rules as possible (code efficiency). I did way too much in player 2.0 to the point where everything would break after downgrading the player.

3 posts were merged into an existing topic: Images not appearing (not uploading correctly?)

The “missed day” was actually a glitch that made it seem that way. It fixed itself within 2 days.

No worries, I always liked being tagged. Makes me feel important.

Also, you coding anything

Are you still going to try a high consecutive day record like Dylan and I?

Yup, in my knowledge I don’t think I missed a day

Yup, in my knowledge I don’t think I missed a day

Well no, I visited 180 days but still didn’t get aficionado badge

But I think I visited maybe 40 in a row

Mines still bugged, maybe just have to wait another day…

is it strange that idk how to hit an enemy?

The X button is the attack button. You must be facing the enemy to damage them.

@Spy_Guy_96 I finally made it to the secret level.

I always seem to fail at the exact same spot (the crate on the x platform).

34 Levels (33 + 1 secret)… that’s got to be a new record for you. I don’t remember how many levels you did last time (not counting the game where you only did 1 level and quit).

One thing I noticed is that the x platform automatically reset after it leaves the screen, which is what I should’ve done for my Weak Platforms.

Not a platformer, but this game had 30 levels, only a 3 (technically 4) level difference! 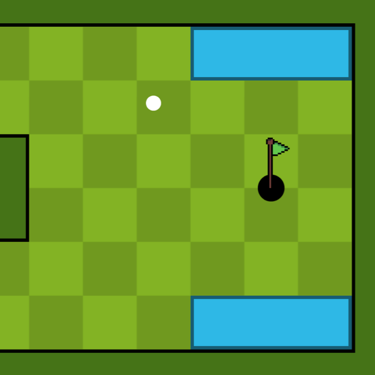 Before Raccoon with a broom, my platformer with the most levels was Frankenrilla at 16 levels 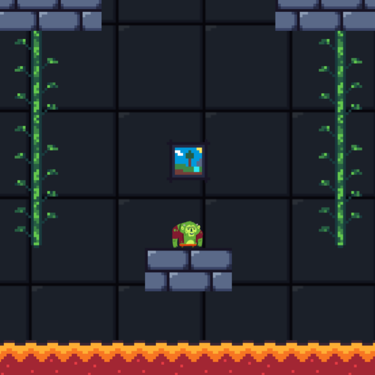 “Frankenrilla - A platformer #trick21” by Spy Guy 96. Made using the free Hopscotch app!

One thing I noticed is that the x platform automatically reset after it leaves the screen, which is what I should’ve done for my Weak Platforms.

I was going to attempt to make a system so blue platforms would work even when unloaded, but I realised that that would be useless as when you activate one and run off screen, by the time you come back the blue platform would be back anyway, doesn’t even matter if it went of screen or not.

The system I had originally in mind was, when you step on a blue platform, the game would spawn a object that removes the tiles collision when the platform disappears. And then after a few seconds when the platform reappears, the special object would add collision again and delete itself from the game.

Not to different from how the game now works, just would mean that blue platforms would work even when unloaded.

When I did mine, I realized the hard way that my system doesn’t work when the tile is unloaded (as in the system is paused until the tile is loaded again).

are you happy you can code?

yeah! i might even start making projects again. or not.

as always, it has its ups and downs… but i’m doing okay lately! how are you?

@Spy_Guy_96 I took a screenshot when I got this far… 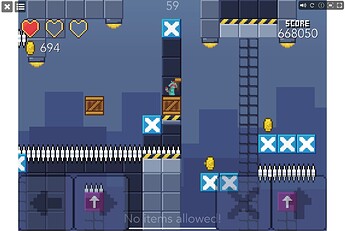 I got to the point where it’s impossible to jump without the box. I’m guessing I need to push the box I’m standing on over to that spot? Not sure how I’ll be able to make the jumps from here if I do though…

For those who are wondering why I only have 1 heart, this is how much health you start with.