less than 10 min would be nice

This what happens when you use hopscotch with no internet lol

A project by @HapPI314 on our collab account!
(Check out!)
@TabbyCats 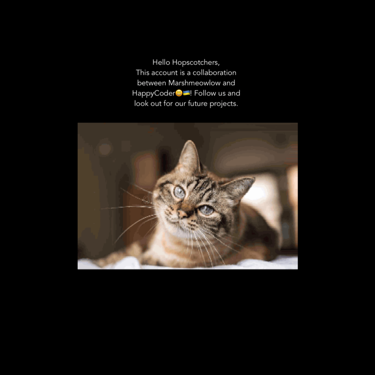 “Hello World!” by MeowPi. Made using the free Hopscotch app!

wow the quality is insane lol

less than 10 min would be nice

okay, lyrics or no lyrics? (sorry for so many questions i have to eliminate some musics depending on what you’d like)

and is it ok if the music is hard to code? :DD

Never mind, it still gets really laggy and slow after a bit of playing.

Last update for road racing 2 is here this marks the 6th update and the 6th month mark since launch. This is the biggest update of them all! 2 New cars Returning from the first road racing the Mercedes-Benz Amg Gts, and the new Icona Vulcano Titanium. Spin to Win has received its long awaited rework added 3 new cars to the prize pool the Icona, Mercedes-Benz Amg Gts, and the Peel p50. New rewards have also been added in to the pool. Drop rates have been changed with the new rewards and the Carre…

I know this is out of the blue, but are you ever going to make another hop battles? I know you already have 2, but it’s one of my favorite games on HS and you announced that you were unable to update it so I was wondering if it was a possibility? (Don’t ask why I linked the post lol)

Any of you guys notice some different work flow since the new update?

I will confirm another Hop Battles game is in the works as of right now. It will not be a Hop Battles 3, it will instead be a spin off to the existing Hop Battles games. The game will feature a reimagined battle system and will be have a more story aspect at least better than the previous game. This game will not be the next project I will release. it will likely be the next project after that. It should be ready before the end of this year. The game is in very early development right now but I will release trailer for it once I have some gameplay to show. Happy to hear Hop Battles is one of your favorite games in Hopscotch.

YESSSSSS So excited! If you make a beta testing topic or update topic please tag me!

It was a main account for a few months. I never really had an alt, per se, I just kept creating new accounts and abandoning old ones. 2015-2019 was a crazy time for me lol.

But I deleted most of the projects and changed the name of it to “Friday the Sixteenth.”

Oh cool, what was the old name? And why did you keep the emojitectures?

I kept the emojitextures cuz… Well, look at the number of likes. I wanna say it was on the old excellent tab… Or maybe a more prestigious tab, I don’t remember.

Can someone tell me Minigames that are small enough that they aren’t a pain to code but still fun? I’m making a Minigames collection but I might have to stop because I don’t know what to add.

Well, look at the number of likes

I thought so lol, I was wondering if you were some crazy famous hopscotchers that got that many likes on all their projects haha

Some thing grower like a flower grower, maybe even a dinosaur grower

and this was written 33 minutes ago