Perhaps in the future, I’ll make more platformers like Spy Guy 96. Given that I can come up with interesting themes and names for each one. I have a few ideas up my sleeve

It’s there a easy was to do a generate random number excluding certain numbers?

If you’re comfortable with while loops using abilities, you can:

If you have few numbers to exclude, you can also do something like this, where you want 1-10 excluding 5:

(you can see how the first is more optimal though)

Two can you send a message in a message block. So like of I receive a message of “hi” can I send “hi” back when I’m in the receive message?

I’d recommend using object name or clone or something to identify the object before “hi”.

(Im attempting to make a sudoku.)

maybe consider using clones to interpret a global string or something (arrays should be in Hopscotch moment #3) and adding values that way instead of passing messages if that’s what you’re doing.

I’m curious to know what this is in particular…

Just the fact that data strings are so common but totally the wrong way to store lists of data.

The only advantage of having a single data string is that it’s very easy to copy. Me, I just have to long press the string, or in some cases triple tap the string.

The only advantage of having a single data string is that it’s very easy to copy. Me, I just have to long press the string, or in some cases triple tap the string.

That’s true though. I think maybe a ‘split’ function would be useful for converting text to an array. Not sure how other array functionality would be implemented though

If arrays are treated similar to lists…

(You can tell where I got these from)

Yeah. I can totally see your point…

right, but how to START a list? Because it would be stored in variables too, right?
^ that’s the hardest thing to get right imo

Because it would be stored in variables too, right?

Well, I’m not sure, but I do know that Scratch’s list blocks is under the variables tab, right under the set and change variable blocks, so it might indeed be something that’s stored in variables.

that’s the hardest thing to get right imo

True. Making a list in JavaScript alone is easy enough. Getting one in a programming app will definitely be a challenge. A 3 star difficulty for both development and design for sure.

Yeah another example is in Edgy, which is based on Snap (and I think Snap is inspired from Scratch)

That moment when you realize Edgy has more blocks than Scratch and Hopscotch combined. I’m not sure if Scratch has more than Edgy counting Scratch’s extension of blocks…

It seems like a cool site. I especially like how you could create your very own reporter (like trait variables in Hopscotch). Setting them up (when creating them on the site, of course) would be a challenge though…

If custom abilities in Hopscotch were able to be ran instantly (and I mean completing in one frame no matter what, which I can understand why that’s not possible, unless it only contains blocks that are able to run instantly, such as set variable, comment, etc.), I would be able to make more advanced blocks such as [find value input (w) string (hello world)] (obviously an object variable would be used to return the result) since that would take more than a frame to complete, but I’m satisfied with what we have now.

I wonder what Hopscotchers will make using the improved custom rules/abilities… they never fail to impress us. 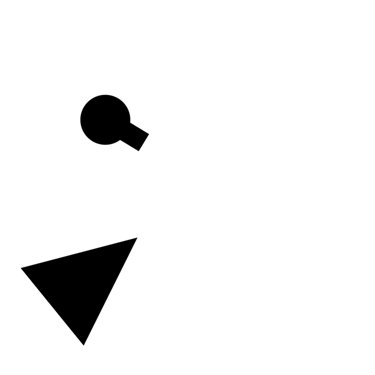 A bunch of custom blocks v1.1 by Crosbyman64

“A bunch of custom blocks v1.1” by Crosbyman64. Made using the free Hopscotch app!

You can now apply an angular offset in the point towards custom block. Perfect for shapes like triangles, chevrons, corners, or pretty much any shape that doesn’t point perfectly to the right at 0 degrees.

that’s kind of what I imagined but really not that great. I mean it makes sense, but having to manually tap each field is much slower than something like a “split” block that splits text at a character. I think having both would probably be useful.

When the water (blue dots) touch the ocean, it destroys it, but for some reason when that happens it lags
How come it does that?

Maybe the clones are cloning themselves. Check whether or not the clones or the original object (when clone index = 0) is cloning the object.

They aren’t, I’ve made sure to prevent that

Well, then we’ll need a link to debug the project. An image alone isn’t enough to give us an idea of why lag is occurring. Awesome_E might be able to give you an idea as to why…