When an object is tapped, how do I make the score go up in another scene?

You can use a variable created in the Game section. It will be the same across all scenes.

Then when you increase it in one scene, it will also increase in the other scenes. 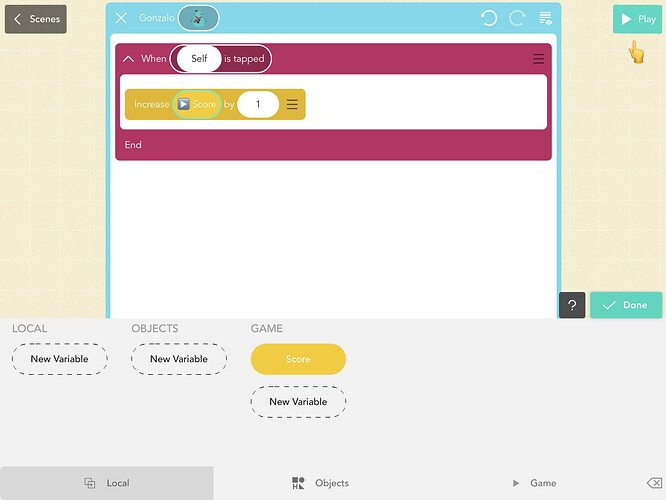 You can read more about the different types of variables in Hopscotch here, including game variables:

In this article, we will explore the four different types of variables in Hopscotch. Here is what you will learn: What is a variable? What is scope? What is a d

I’m just going to split these out into topics in #debug-my-code so that others can learn from them too! These are really valuable questions.

Unfortunately, doing things across scenes is not possible, as the inactive scenes are initially not loaded which is why you get that white flash when switching scenes, and they are also paused (including its code) when not in use.

However, you can prime the score update system with a variable, then on game start in the next scene, broadcast a message that auto updates the score by adding the new value, then reset the value of the new variable.

Is anyone going to answer

Ok but why did you make the words get small

because my ipad is glitching.

If you start a “when game starts” code in one scene it won’t save to another, because the editor treats “when game starts” like “when scene starts”. And scenes are separate and don’t really connect besides the change scene block, so no code like that can work between scenes. If that’s what your asking.