I was just trying to drag blocks into a new rule in the web editor, but it ended up throwing an error in the console, preventing any new blocks from being dragged in.

The error is thrown when:

I’m running this on Firefox version 104.0 on Arch Linux. I was also able to reproduce the error on Windows 11 with Firefox 104.0 (same version, they’re both latest).

See this video for more info: 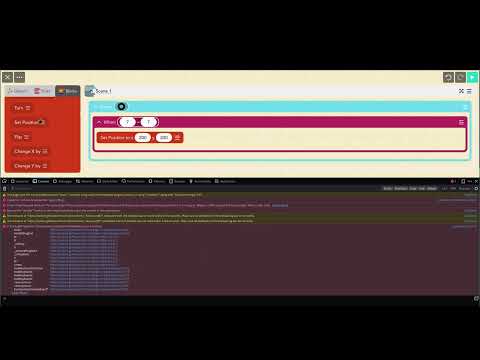 (i edited the category)

Note that I realized after recording that my Firefox has a bunch of script blockers on it. I installed a fresh vanilla copy of Firefox Developer Edition with the same error, though.

Although I enabled all of the JS in the recording, some of the errors shown in console in the OP might not be there on your side @Awesome_E and that’s just probably a side effect on my side. Please disregard the extraneous stuff if you end up looking into those, haha :)
The main error is hit on vanilla Firefox too though.

Yeah, I know. For some reason, scrollIntoView is not supported in Firefox… I thought it was standard!

I guess there’s a polyfill that would fix it haha

You’d hope browser support would be better than that…

Does this website work okay on Microsoft Edge?
If it doesn’t then I can’t make Hopscotch projects on my laptop :((

Edge is a Chromium-based browser, so it should work fine

This will probably need a polyfill[1] to solve properly

Scroll to is also the name of a different function

Always calling scrollIntoView is not the right solution because if it’s on screen already it will still shift.

This will probably need a polyfill[1] to solve properly

a google search returns some

yeah I’ll get to it next week

Here’s a temporary fix for anyone that does want to use the editor in Firefox! Instructions to install the workaround are in the GitHub repository below. :) 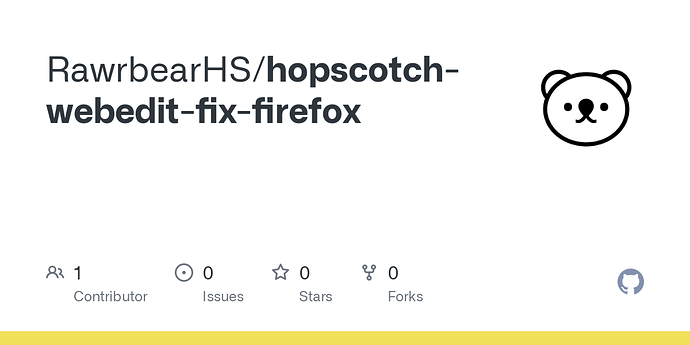 Contribute to RawrbearHS/hopscotch-webedit-fix-firefox development by creating an account on GitHub.

You can use this Tampermonkey script until the web editor gets patched sometime this week!

(CC @Awesome_E - you might want to check the script file to see the polyfill I used! It was really easy to implement!)

I’ll look around for it!

Well, I have a 1 week sprint… so it shouldn’t be long! or at least I hope it won’t be long

We’ve updated the web editor so that it’s at least usable with Firefox. There’s still some behavioral differences as well as things that don’t work in Firefox (such as undo/redo – the stack is there, but undo doesn’t work the same). You will still be able to use & enjoy the rest of the editor without it breaking right away though!

This topic was automatically closed after 4 hours. New replies are no longer allowed.