Some of you have reported that Hopscotch would crash unexpectedly on your devices. Great news - we have a fix! This version will allow you to code, play, and learn in Hopscotch without interruption.

If you have any questions/comments/feedback, please email us at help@gethopscotch.com. Happy Hopscotching! 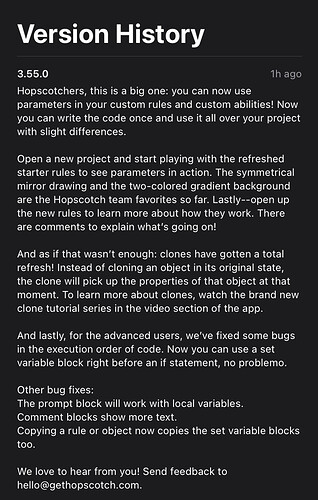 Looks like the release notes are incorrect — we are looking into that. But the update has the crashing fix.

@Mouldycheese8 you are going to love this update. ^^^

I will definitely be able to test by tomorrow, since my iPad is offline for the night (because my par.ent’s internet doesn’t reach my bedroom). I’ll keep track of the time I’m on the app (I have a few projects that can do that (my Rubik’s cube and Stopwatch projects), I’ll test for 5-10 minutes (because at that point I know it’s not going to crash anytime soon).

My app still crashed with time after the fix. I uninstalled (to clear the cache) and reinstalled, and that seemed to fix the issue (I don’t know for how long though. We’re hoping it’s fixed indefinitely)…

Yep, I can definitely confirm the crashing issue is resolved. I’ve been testing for over 10 minutes (I took a screen recording in case it crashes by chance) after it being offline for 8 hours, and it hasn’t crashed once.

If any of you are still having unexpected crashes with time, try uninstalling (make sure to log out first and remember your password) and reinstalling to clear out the cache (like custom images, unused PIXI version(s), and extra webplayer versions). It should fix the issue.

Yes, there is a typo with the version number and the app store detail page. We’re looking to get it resolved, but I’m glad the build helps with the crash!

I just tested again to ensure I didn’t get lucky last time. Still no crashes, so it looks like the build definitely did help.

I’m going to test over the weekend just to be sure.

{on a side note: I can’t wait for the major release which I’m hoping releases soon in October. I already know it won’t be any time in September because it’s already pretty much the end of September, and tomorrow is the start of a weekend anyways…}

did you update your hopscotch app from the app store?

Yes I did do that

You might have to delete and reinstall the app, as Crosbyman mentioned here

If any of you are still having unexpected crashes with time, try uninstalling (make sure to log out first and remember your password) and reinstalling to clear out the cache (like custom images, unused PIXI version(s), and extra webplayer versions). It should fix the issue.

Ok I can try that

Wow it seems it worked

To be sure, try it out for a few days to ensure it didn’t just fix it temporarily.

Continuing the discussion from You Can Talk About Hopscotch Here; Topic 30 [OFFICIAL]:

Thanks for gathering these and letting me know. I just included them here so it’s easier to find.

I would prefer if they’re in bug reports, if that’s ok (it takes a lot longer to investigate otherwise and then fixing them becomes much more delayed)

We’re going to try address this in the next update, thanks for reporting too @RoadOcean

When downloading a project, if you go back before it finishes / opens the project, or it returns an error, you are unable to choose another project in your drafts until you quit the app.

I think this might be addressed in the next update too, but we will have to do some testing. We have a fix for project images being broken, and addressed some related issues when downloading projects from the community.

Sometimes entering values in parameters causes the block to scroll all the way to the beginning instead of remaining where it was. This makes editing large parameters more difficult, and it takes much more time to do so.

Large projects have a chance of womping after some time (larger projects womp faster than smaller projects). It doesn’t even show the error message, it just displays a white screen (even though the code says not to do so).

I would appreciate if I can get videos for these (if they’re easily reproducible). I will put it on hold for now until I get another chance to investigate.

The last one will be hard, since it sometimes happens (mostly after an hour or so of playing). The other two I’ll be able to replicate since they both happen frequently.

Unfortunately, it’ll have to wait since catbox is currently down (500, Internal Server Error).