Upgrade YOUR Web Editor with this Browser Extension!

A browser extension that creates a new but familiar interface for the Hopscotch Web Editor! 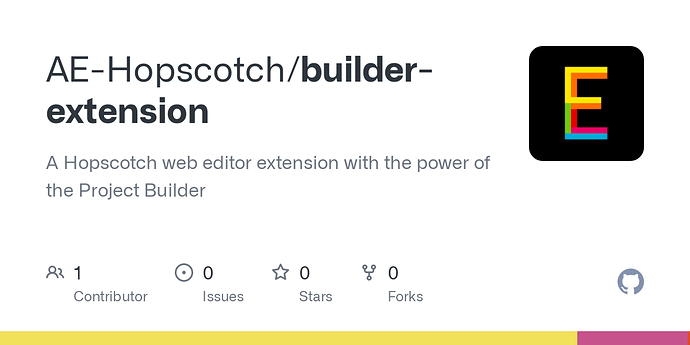 You should get a message that says “Extension Loaded”

This will be written once compatibility with Firefox is tested. However, you can still download the source code and make a build yourself by following the development instructions, and then creating a Firefox extension from the firefox folder inside the build directory. (More detailed instructions later)

This is not supported yet, but it may be possible. If I do manage to add userscript loading support, then it will be possible to get this modded editor on iOS through the user of the “Userscripts” app.

(This information is also available in the initial release notes)

the definition of E is awesome! :P

That’s correct, for the time being. But if I add support for loading via User Scripts, you will be able to use this on an iPad

YES!! I had the worst time trying to figure out how to use shortcuts and files this makes it so much easier!!!

Less goo.
So can we use this on a mobile device or only computer?

You need a computer with chrome.

Mobile Devices can only use approved extensions from the App Store.

WAIT I JUST SAW THIS-

Let me test it out when I get home

what about apple extensions on the appstore

also could you make a firefox extension?

what about apple extensions on the appstore

also could you make a firefox extension?

Yes. In the meantime, you can still create a build yourself with instructions in the OP

This is amazing! I’ll go ahead and install this right now:))

probably not, this isn’t official. plus if tht can, ae would already done that

This is not affiliated with Hopscotch in any way

I know this is a stretch but…

What do you mean?

He has the developer subscription i think