1 sentence description of the problem (I was doing _coding, and then the variable went all weird happened):

I expected this to happen: Edit a variable like normal

But instead this happened: Edit a variable but it goes all funky and messes me up! 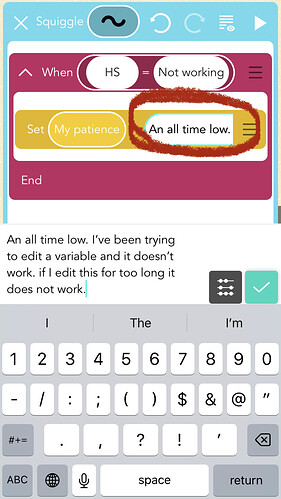 What kind of device are you using?: (Also include iOS version, and Hopscotch version) 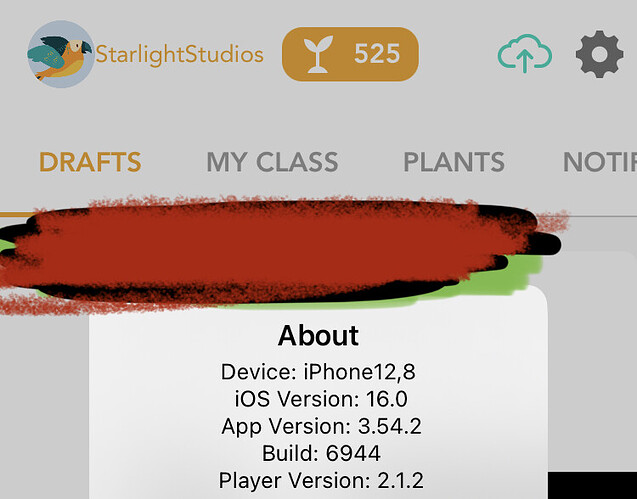 Also this might only break the text if you use a game variable and use lots of spaces in a row. Also you might have to exit and re-enter the variable thing idk just try it out.

I was not able to reproduce this, even when typing the exact phrase you wrote. Parameters take a little to update so undo doesn’t just undo a single character. After the parameter updates, try tapping out of the variable block first, then see if the problem is still there.

Device simply just shows the device code. It doesn’t reflect the actual name of the device.

Wait…
You have 525 seeds!!!
Anyways, I don’t think this is a bug. Maybe try clicking anywhere to get out of the block, and go back into the block

I just caught this on video

That happens to me also

i like how you’re writing poetry in variables lol -

i haven’t experienced this bug but it loks annoying, hope it gets fixed soon!

i haven’t experienced this bug but it loks annoying, hope it gets fixed soon!

i’ve had this ton of times but i’m too busy to create a bug report. you can notice if you click

to save your text, hopscotch will not glitch

Yeah but it erased it while I was typing, or was that because I didn’t press it before?

It still glitches if I press the checkmark

Alternate title: Text parameters sometimes forgets what you typed when typing for too long

It might be due to how UNDO and REDO works, but still, text disappearing like that is very annoying…

And I thought the “cursor automatically gets sent to the end of text if it contains an emoji” bug was bad… (luckily, the bug I just described isn’t an issue anymore…)

The text resizing bug that makes the text blurry is another bad bad bug :((

Use this template to make awesome bug reports: Your username: Crosbyman64 What kind of device are you using?: Apple iPad Pro 11" 2018 (iPad8,1) 1 sentence description of the problem (I was doing _________, and then __________ happened): I was messing with size percentages and found a bug where the text became invisible to the player. I first noticed this in @Spy_Guy_96’s (sorry about the second tag) Super Robo Land game. Steps that the Hopscotch team can take to reproduce my problem every ti…

Yes it is… It’s a mystery why it’s occurring…

I did also notice the blurry text, which was discovered by Spy Guy 96. This is another bug, that I think might be related…

That’s not what I’m talking about, this is an example of what I mean 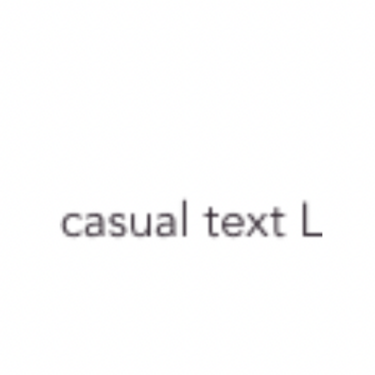 The most readable hs text (it only gets worse) by StarlightStudios

“The most readable hs text (it only gets worse)” by StarlightStudios. Made using the free Hopscotch app!

If you increase the size instead, the project will start to lag badly.

It may be a text rendering error that causing it to be blurry, because if you only set a small size after setting the text, it’s as sharp as it can be. It mainly only happens when the length (width) of the text isn’t the same before the small size is set.

Hmm. It might just be an issue on iPhones. I’ve been typing a lot in parameters on my iPad, and it never glitched out / erase some text.

Maybe has something to do with undo and redo

Yeah I’ve had this happen too just now while testing a single sentence — it is pretty frustrating!

I will do some more investigation and see if we can find a fix for it.

Also I noticed the gap when typing on iPhone, between the text and the buttons on the right — we will fix that too.