This Siri Shortcut Can Modify your Projects | 𝓐𝔀𝓮𝓼𝓸𝓶𝓮_𝓔

@Awesome_E, does the project builder allow importing presets into a project opened from a link? I’m having trouble with that

I thought you should be able to but apparently I didn’t allow all file types and iOS doesn’t let you specify specific extensions for some reason. Thought I did.

@Awesome_E I found a hilarious bug in your player

Interestingly enough, I think that’s the result of having two things outdated:

Yeah the rules with the not operators don’t run at all on your player.

I already know about the incompatibility of local variables on your player, and I saw how crazy and broken it gets, especially with my newer platformer. I changed them all to object variables for the purpose of something else

Less than a day later (

Webplayers should now be in sync with the latest production version from Hopscotch at all times. Modifications are made on the fly when you use my modded player at any given time.
(this also means that local variables and other features that weren’t added yet are now supported in the player)

I am having a bit of trouble loading my game on your player. Was trying to test out the newly added controls.

It says “sorry, unavailable. try again later” (similar to that error) on my side. It does load in the project statistics, at least.

Edit: Tried doing a Force Restart with no luck.

@Awesome_E It seems only the projects with literally only 1 function will load on my end, but any more than that, and it will return the error “Sorry, try again later”

I am 100% certain I am connected to the Internet.

My bad, accidentally made a blank substitution go in as undefined instead of empty string. Just pushed a fix, and it seems to be working now.

Even better. My older game is finally working on your player. It actually defines the level dimensions this time.

It affected round, floor, ceiling, sine, cosine, and absolute value.

The official comment block will also let you run modded player actions in my player!

Since text in multiplication is always interpreted as zero, the multiply block will always be zero in vanilla Hopscotch. 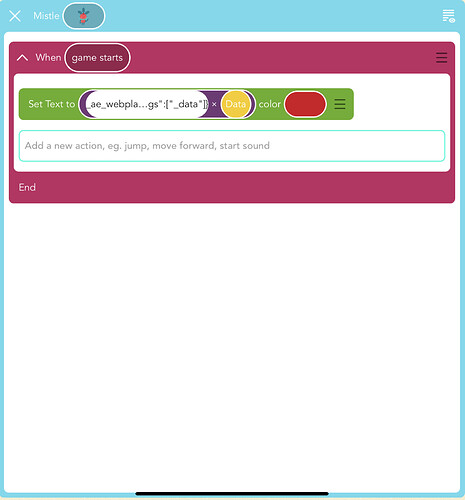 image1520×1632 98.8 KB
But, what if in the modded player, I could evaluate a webplayer action instead of doing the multiplication? Then it’s still either 0 or 1. (This would only happen when the text starts with _ae_webplayer_action:

To be honest I don’t care how random it is, I’m too lazy to get secret blocks lol

Actually I’m so lazy I feel _ae_webplayer_action: is too long

Actually I’m so lazy I feel _ae_webplayer_action: is too long

Me too. I use a text replacement, which you can set up in your keyboard settings. That syntax is really to make sure you don’t accidentally have a string that causes it to think it’s a webplayer action

I also added ae_default, which returns a blank webplayer action (basically the string you mentioned above)

@Awesome_E any way to have a variable store json on the webplayer?

Not that I know of currently