I think it would be cool to have a star program like The Roblox Video Stars Program.

In roblox there are “Star Codes” that you type in when buying Robux, you type in a Star code, it gives that person a bit of your Robux (you get all of your purchase, they just give the owner of the code some Robux) 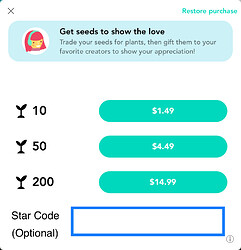 In roblox games there is something called a “Star Creator Badge”

On the web explorer there could be a

emoji next to that person’s name.

This could be added to

The Star code feature could be added by popping up a prompt asking if they’d like to add a star code, then you will almost instantaneously earn the seeds

So, you can add a star emoji next to your name/Web Explorer

Poll to add the

I think it sounds good, but it’s kind of hard to understand.

Personally i dont think this would fit hopscotch well

I feel you didn’t explain this well enough (for me to understand, anyway).

So instead of robux it would be seeds, right? So when someone purchases seeds from THT, they could enter a code to earn a few more seeds? But how would stars come in?

Apparently, if you purchase seeds, somebody else would get seeds out of the blue

Oh, so you could add a code to give a certain user some seeds too? So basically a free donation.

Don’t know
Since the seed developers can send other seeds

Kind of but instead of your own, just random ones out of the blue! For… some reason.

Yeah thats what i thought

So to rephrase this, it’s like a YouTube affiliate link where the person gets it for the same price but the person whose code it is also gets a couple seeds?

I don’t share my robux lol also what if 2 ppl has the same emoji? I don’t get it

Yeah, that’s what I mean

I’m a bit on the fence because while the idea of ‘affiliate links’ in Hopscotch seems fine, how would they be created in the first place? The reason platforms do that with content creators is to incentivize people who have large audiences/followings to promote a certain product and increase sales. Hopscotch doesn’t really have creators who have a large following on such platforms, if that makes sense.

So, you can add a star emoji next to your name/Web Explorer

Why does it matter if more than one person has that emoji?

Bc I don’t get it in the star code that do u just put their emoji or what?