This event/competition/challenge is started by me (@nobody) and all the currencies, rewards, and prizes are handled by me, not Hopscotch. You can find other similar self-started events in the latest #competitions-and-events or #shops-and-requests topics, or even start one yourself. Because this is started by me, Hopscotch and the forum leaders are not involved or responsible in any of the transactions here.

as you may or may not know, the soccer/football World Cup is coming up later this month
so i will be hosting a competition based on the event

in the World Cup, there are 8 “groups” with 4 teams each. each team in a group plays all the other teams in their group. if they win, they get 3 points. if they draw, they get 1, and if they lose they get 0. the top two teams in each group advance to the next round, the round of 16. they are matched with another team that advanced and play that team, with the winner moving on (basically a bracket format). this happens until only one team remains.

the hopscotch version will work in a similar fashion, with original groups of 4. each person will make a project (based on a theme for that round) that is judged by a point system (rubric). the 2 people (in each group) whose projects had the most points will advance to the next round and make another project that is scored against someone else’s project. rounds like that continue until 1 person is left. here is a visualization: 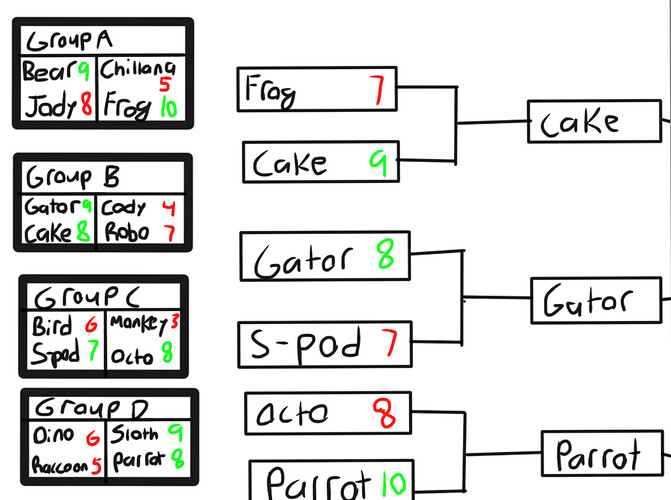 image1362×1014 157 KB
note that although only 6 teams are in the bracket, there would be 8. i just couldnt fit it all on the page:p
the scores in green would be the winning scores of the projects
also, the winner of each group is guaranteed to play someone who finished second in another group

after the time to enter closes, groups will be decided by a random draw

What if there is an odd number of people/groups?

groups will be generated as evenly as possible, but in the event that there is a groups with, say 3, people, 2 out of those 3 people will still advance. if there are 3 groups, then the 2 highest scores will receive a bye (else there would be 3 people left after the 2nd round, which would be a problem)

i, @/henry and one other person will judge
if you want to be one of those judges, ask me
it would be optimal if you are consistently able to get on daily for about 10-25 minutes, as that is the length of time that i think will be needed for judging. it wont be an everyday thing, but predicting what days you will need to be on is difficult, so being able to come on any day is preferable

this is the rubric that will be used across all round

thats a total of 50 possible points every round, which is 47 more than you normally earn for winning a soccer match (/lh)

let me know if you want to add prizes:)

Hey @Nobody , I’m willing to judge, if you want we could speak about potential conflicts I have this month.

I don’t think I can join oof, it will be interesting to see how this turns out

ok, thats not really necessary unless you cant be on for an extended period of time

Oh yea thanks (i forgot-)

@894ers pleeease check this out! It’s not really my thing and I probably don’t have the time but you guys should definitely consider this! (No need to thank me or anything @/Nobody, just thought I’d spread this!)

i would join, but i can’t exactly make projects right now

@Nobody, i’ll give 50 spamlikes on the forum and 50 on the app to every participant

@Nobody I would like to give 4 seeds to 3rd place

I am still deciding weather to join or not ;-;

it’s absolutely fine if i quit so it becomes even (i saw 11 was uneven so i decided to vote so nobody will have less troubles making the teams)
if i quit may i judge?

it’s absolutely fine if i quit so it becomes even bc i saw 11 was uneven so i voted
if i quit may i judge?

if you want, but it works with an uneven number
just let me know which one you decide on as im starting to randomly select groups soon

oops i didnt see that sorry (i think i quickly opened every new notification without reading them, i kinda do that now that im busier - so feel free to tag me whenever you need me to read properly a post lol)

no problem, thanks:)
i do that too
or i just dont read them at all:p

the extra person (only person left after all even teams were created) was assigned a group based off of a random number generated between 1 and 3. that group will have the top 3 people advance instead of the top 2