The Adventures Of Squaeyron [Updates Topic]

I don’t know why, but I always seem to find areas where I can make more code efficient.

Wish me luck, I’m about to do something so crazy, that even I don’t know if it’ll even work or not…

Here’s a little sneak peek at what I did: 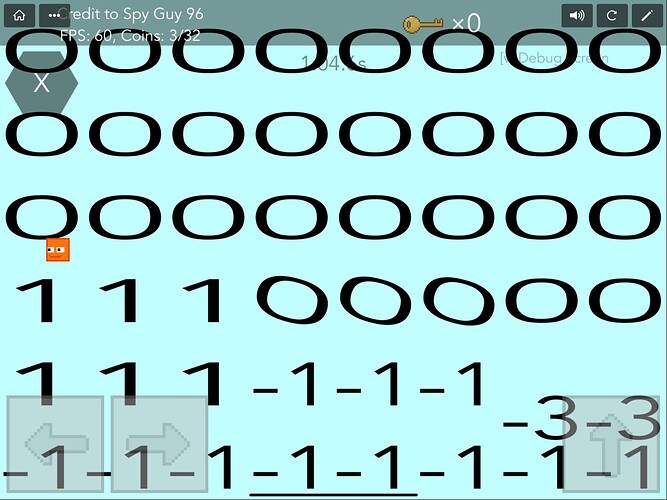 The ones that are negative are tiles that have their collisions cancelled due to range. I’ll need to test this with more tiles, especially the ones that make you go fast (dash platforms), to ensure you don’t end up clipping into the ground. When you get in range, the collisions are reactivated.

The current range from the tiles to the player is 256x256 from the entire stage size, and I can make this bigger if need be.

I’m also gonna make the range as small as I can before the clipping glitches start to occur.

@Spy_Guy_96 do you think this is a decent idea? I was still able to pass my level without any issue. The numbers you see are just temporary. It’s for debugging.

I tested the FPS (on my old iPad), and found out that the performance really depends on how many tiles are on screen. During gameplay the FPS can go as high as 33pfs but it can also drop as low as 22.

That does make sense, as the project has to constantly refresh the tile positions every frame, plus a bunch of other things that can cause frame rate to drop.

Wait, which version did you test on?

This project (https://c.gethopscotch.com/p/12juixsl0n) is now live.

BETA VERSIONS TagList
@Spy_Guy_96 I tried to make the game speed adapt more like yours, but ended up abandoning it due to glitches like clipping [1] (mostly due to my Dynamic Range feature).
@ALBUS
@SEPIA
@Tabitha
@KingNomNom
@cappuccino
@RoadOcean

Also, have any of you played this game on anything other than mobile? Remember, it’s also compatible with keyboard (WASD / Arrow Keys to move, Space / W / Up to jump).

Also, have any of you played this game on anything other than mobile? Remember, it’s also compatible with keyboard

I am excited to say this project made it onto masterpieces!! Woo-hoo!!

@SEPIA your wish has been granted.

Thank you so much…

hey hey @Crosbyman64
i was playing this game on the web explorer a few days ago, and i believe i have located a small bug in this fine game

how to replicate:
in level seven, after collecting the first key, jump straight down, without touching the walls at all. when you hit the floor, you clip through, fall out of the world, and die.

any idea why this happens?

very good game, good job. i can tell you put a lot of time and hard work into it

I made it so only certain tiles load in depending on where the player is. My upcoming game will use local collision instead. No set release date yet.

When I tested the fall in a custom level with a height of 99, I didn’t clip through the ground. I even tested it at 30 FPS.

there are two similar falls [except bigger i think] in level 8 and neither of them clip me, just that one, and reliably