What kind of device are you using?: (Also include iOS version, and Hopscotch version) iPad 5th gen on ios 15.5 with the latest hopscotch version (3.52.0 i think)

I expected this to happen: it to show the original value of the 1st object

But instead this happened: it showed the 2nd object’s value

So, the text on the bottom (just above keyboard), when you first enter the text field, doesn’t update to the value in the bubble, correct?

Thanks a lot for reporting this, the clear and succinct steps are very helpful too.

I will do some more testing, but it does seem to be easiest to reproduce when switching between objects, and if the Set Variable block is outside Whens. 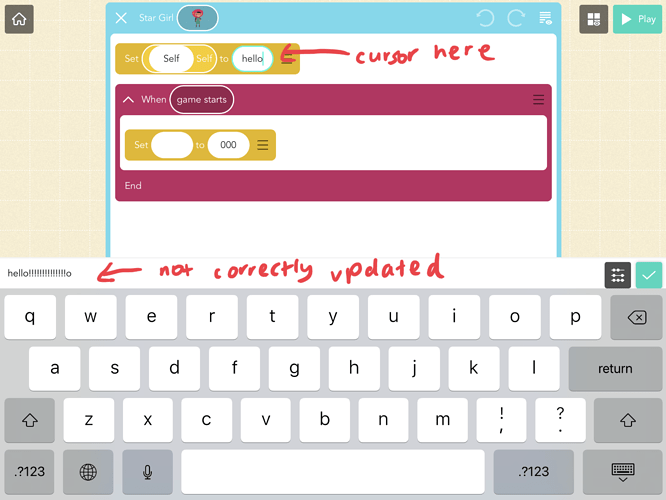 Temporary workaround until we have a fix:

In the second image, tap outside to another block and then tap inside the text parameter that you want to edit again. It should try to set focus to the text field above the keyboard correctly.

I don’t have a timeline for a fix at the moment, but we have included the issue in our list.

This should be fixed now in Version 3.53.0 Official Topic (Much faster performance + bug fix)

@Friday can you clive?

(it already has autoclose if you havent seen it)

Closed since I was tagged about it. Glad this is fixed!