Strings can be typed into numeric inputs

What kind of device are you using?: iPad 6th Gen

1 sentence description of the problem (I was doing _________, and then __________ happened): I noticed I can pull up the keyboard while inputting a number into a set position block and decided to mess with it because why not.

I expected this to happen:
I was pretty sure it was a bug, and expected inputting the “coordinates” (-1 is, superior) to not work.

But instead this happened:
It did what I expected — nothing. (I mean, where are the coordinate (-1 is, superior) on the screen?) But I figure it shouldn’t be possible to be able to input text coordinates like this. 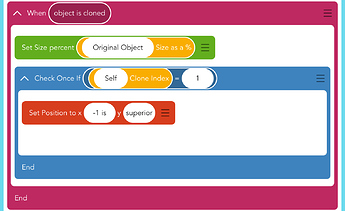 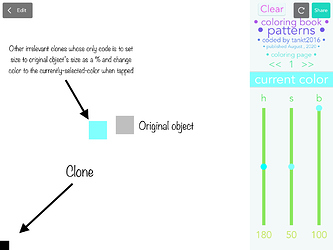 image2048×1536 374 KB
The black clone — the one with the text coordinates — is the same size as the other squares on the screen. Only one quarter of it is shown because the center of it is at the coordinates (0, 0).

I assume Set Position isn’t the only block you can input text into when the block only does anything if you input numbers, but I haven’t checked.

Because strings have a value of 0

Agree. Minor bug, but I hope that it can be fixed!

Also when you are setting a variable to something, the keyboard pops up immediately and it is pretty annoying

This part of the new update. I’m pretty sure it’s not for the movement block. And unless you set the text to something then it would always equal 0.

I disagree, if that was the case then people would never think outside of the box.

@leaders what to do with this tpic

We’re working on a fix for this.

It is resulting in one issue where the keyboard will automatically switch to text when you open an empty parameter, even where it’s a block that takes numeric input (e.g. Move Forward, Turn) and strings don’t do anything when the project is played.

This was unintentional but had been around for a while, since string/text operators were introduced.

Only parameters for the + operator, and parameters for custom abilities/custom rules, will show Aa button. And only they will open up the text keyboard when empty.

Should check once if (variable=0) match strings?

@Yuanyuan @t1_hopscotch ^^^ I think you forgot about the multi-purpose parameters (ones that should allow both numbers and text). The parameters in the equality operators seem to think it can only support numbers and variables…

(Bobinny, as a workaround, you can just copy some text and paste it into the parameter).

After doing some testing, it seems to just be the equality operators that have this issue.

Also, for some reason you can copy and paste text into places where it shouldn’t

(not, and, or (logical operators), a blank if statement itself, and pretty much every block where it doesn’t support text)

Oh right I had forgotten about equality operators. Thanks for letting me know — we will need to fix that. It may be some time before that change comes out though.

This should be fixed now, I’ll set this topic to autoclose

This topic was automatically closed after 2 days. New replies are no longer allowed.