Set Image to custom image results in womp when scene loads, in player 2.0

1 sentence description of the problem (I was doing _________, and then __________ happened):
Projects on webplayer 2.0.x have certain scenes womp on loading, if the scene has an object with a Set Image block set to a custom image.

I expected this to happen:
The project will play correctly.

But instead this happened:
The project womps when the scene is loaded.

This also happens on old projects that have Set Image blocks to custom images, if upgraded to latest player version.

When switching scenes, the old scene will reload and then womp when trying to change to the new scene. 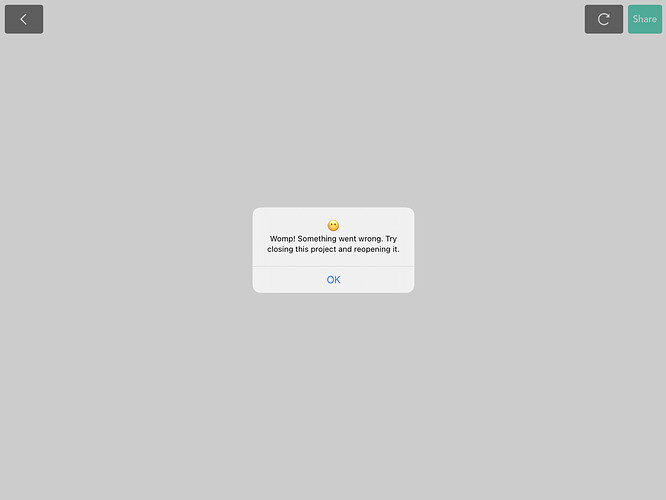 If you have projects that have the womp error for scenes, you can link them here so I can do testing on them. (If there are other issues, we can create a new topic for each of them.)

If they’re drafts, and you’d be ok for me to test the project, you can just tell me the title of the draft and I’ll test it. Note that it will not affect your version of the project — we get a copy of the project to test on.

You can test on Copy of The Unstable Greenhouse (draft). My account is Tri-Angle Studios

First issue: doesn’t change to scene 2, womps after second try.
Second issue: One of the 3 hexagons is not in the center of the screen (change scene animation). There’s indeed a set position block, the 2 others are working and on the draft without the latest player, it’s working perfectly.

Please do not test on The Unstable Greenhouse, test it on its copy :)

Thanks so much. So it looks like it’s the Set Image block with a custom image that is resulting in the womp error.

When I remove the Set Image block, the scene stops having the womp error upon loading. I’ll check this and we’ll fix it if this is the case.

(Just going to note as well that when we look at the project from admin, it doesn’t affect the original project on your end — it’s a copy of the project)

Yeah sorry that was my mistake, it hasn’t been released yet (just edited my post)

Ok, the fix for Set image block with custom images and the womp error should be released now. It’s been updated on the webplayer end so you don’t need to update your app. There still seem to be bugs with custom rules when upgrading older projects, so I’d probably say, for this competition round, to stay on whichever version your project is created in — whether before the update or after — as we might not have fixes in time. Let me know if there are any other ongoing issues.

i can confirm the scene bug and the womp bug are now fixed :) my testing project works well now

off topic, but is it normal the latest player brought bugs to my game?

off topic, but is it normal the latest player brought bugs to my game?

No this isn’t normal, I’ve noticed some bugs too when upgrading projects and am trying to hunt them down (maybe clones and send to back, and custom rules not behaving as intended)

I’ll make new topics for any issues I find too.

okay, you can do tests in my project too - there is this issue

Second issue: One of the 3 hexagons is not in the center of the screen (change scene animation).

okay, you can do tests in my project too - there is this issue

Second issue: One of the 3 hexagons is not in the center of the screen (change scene animation).

Yep I remember that issue and have made note of it. I’ll make a separate bug report if I find any more info relating to that.

This topic was automatically closed after 5 hours. New replies are no longer allowed.