Music in games and other stuff to prevent some bugs

Sorry for bad handwriting, it says “When (Scene=Scene1)”.

I’ve seen something similar in another programming language, it looks like this:

Whoops I noticed a bug when making a topic in this category (I edited it)
It says: I’ve seen something similar in another programming languageS (wrong), it looks like this:

This is actually already possible if you add a ‘set variable’ block before changing the scene!

Yes but then when you change the scene, the game starts again and that set variable will be set again.

Yes, but does it really reset the variable?

My brother created a game with scenes, but the backdrops glitched…

I’m talking about using a constantly changing variable at times

Yes but then when you change the scene, the game starts again and that set variable will be set again.

use a second variable from preventing that

I never really liked too many variables, but ig so

Variable are only reset to 0 when you exit or edit the project.

When working with clones, you’ll need to add a “check once if (self total clones) = (1)” in all when game starts rules to prevent a glitch where all clones look exactly the same / clones even more than its supposed to (which can cause lag spikes real quick).

also when a scene changes, which causes When Game Starts rule to get run

THT should rename that the “When Scene Starts” block, imo… When Game Starts is a bit misleading, since most people think it only runs once per game start (and going to a new scene doesn’t always mean a game is starting (unless each scene is a different game instead of different levels or areas).

Tell me if I’m wrong but code from other scenes doesn’t run when you aren’t in that scene I think? If that was the case though you probably wouldn’t have suggested this in the first place.

It would still be cool to see something like this so that that code runs for that scene only.

Hey can you leaders delete this topic

I think this is a cool suggestion! We can keep the topic (unless you really want to delete). It looks like there might be a few different ideas which might meet different use cases:

These were some early ideas I had that might still work for a “scene name” variable. That could be used in conditionals! 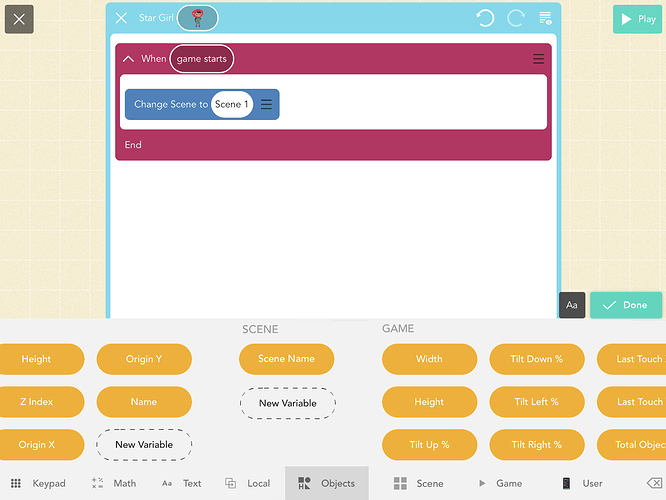 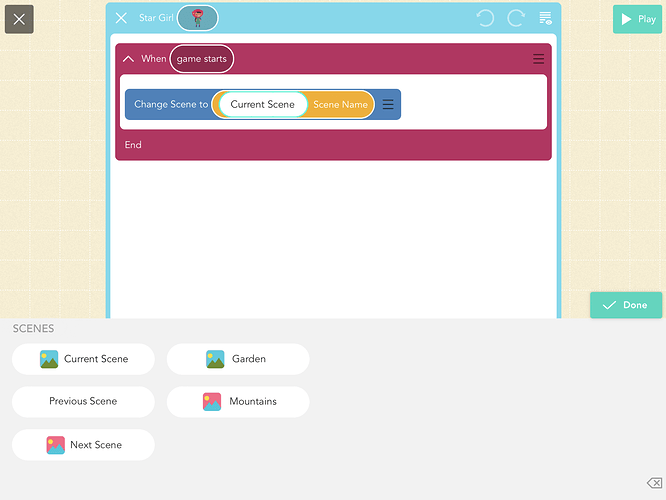 Also something I forgot to mention for the topic was maybe also having an object variable for scenes, but that works too!