Would anyone be willing to help me beta test this game?
I’ve decided to keep it simple, but polished, and I’ve got a playable version ready.

id be willing to if i have time

Let me know if you can access this:
https://c.gethopscotch.com/p/125njacksw

Some questions to answer:
Is the gameplay fun?
Is it intuitive?

Is the tutorial understandable?
Do you need more information from the tutorial?
Was it clear what you needed to to do get to the next step?

Does the ui properly show what can be built and what can’t?
Were there parts of the UI you didn’t understand?

Other feedback?
Did you find any bugs or glitches?

yes, but i need to use E’s webplayer since its a draft (drafts cannot be accessed in hs)

Is the gameplay fun? yeah, i always enjoy civilization games
Is it intuitive? yes, but i think that buildings should produce resources every so often instead of just once (i didnt notice that happening but i didnt play for too long)

Is the tutorial understandable? very, the game itself is nice and simple as well
Do you need more information from the tutorial? i wasnt entirely aware that you had to hold on a spot to place a building, but i might have skimmed over it if it was in the tutorial
Was it clear what you needed to do get to the next step? yep

Does the ui properly show what can be built and what can’t? yes, but on the tutorial it said i could build things other than a farm—not sure if that should happen or not
Were there parts of the UI you didn’t understand? nope, everything was clear

Other feedback? what else are you planning on adding?
Did you find any bugs or glitches? if i stumbled across any, they seemed like undocumented features

Can I beta test?

Wow, the visuals are amazing
And the gameplays really fun as well
Like cool suggested, it would be cool to add other Civilizations that you can fight, but I’m guessing that would take time.

I don’t think I have time to beta test for this but good luck with your project anyways!

For some reason you have to reload it.

thanks @Awesome_E! i can play it now 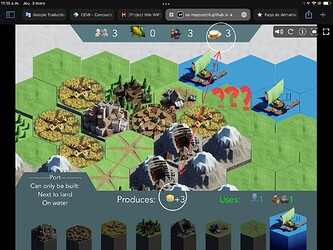 Is the gameplay fun? 9 on 10, it needs more actions :P
Is it intuitive? A little bit confused about what to build at the beginning but it becomes intuitive after then.

Is the tutorial understandable? Yes!
Do you need more information from the tutorial? Nop
Was it clear what you needed to to do get to the next step? A little bit confused about what to build at the beginning but it becomes intuitive after then.

Does the ui properly show what can be built and what can’t? Yes, it shows what i can n cannot build. And what’s an UI?
Were there parts of the UI you didn’t understand? What’s an UI?

Did you find any bugs or glitches? Nop

UI stands for User Interface, i.e the buttons and menus.

also, @CreationsOfaNoob, you can see my civilisation has a very unbalanced nb of roads and building - i was going to be stuck with no other buildings i can create if i didn’t add any roads in time. So it would be cool if we have an option to delete (not move, because it’s extremely irrealistic) a building.

Omg!!! I love that game!!! Maybe you could make it so It doesn’t reset every time exit the game

This topic was automatically closed 90 days after the last reply. New replies are no longer allowed.