Open-Source Courses groups advanced skills that are very useful in all sorts of projects. They are completely free to use and no credits will be needed. Support and new topic ideas are very appreciated to help me keep content quality high.

Springs are essential for any sort of physics-based motion animation. I’m very surprised not to see this a lot in Hopscotch - and I’m here to change that! Believe it or not, they’ll become your best friend after finishing reading this tutorial!

What is a spring?

A spring is an object capable of exerting an opposing force when it’s compressed or stretched from its original position. For example, in most ballpoint pens, you will find a small heavy duty coil spring, designed for exerting a force against you when you compress them.

To make sure you understand the vocabulary to code a spring in Hopscotch or any other external code app, let’s learn three new words: stiffness, mass, and damping. You’ll also need to differentiate between an acceleration and a speed. These are keywords in this tutorial and will be mentioned a lot - bring a coffee or tea if it helps you to concentrate!

“Damping is the force that slows down and eventually stops an oscillation by dissipating energy” - Maxime Heckel. It is a friction force, an acceleration exerted in the opposite way of the current speed. Wait, woah, what a beautiful introduction to acceleration vs speed!

The acceleration is not the speed - two are different concepts. If you accelerate constantly your car without stopping, you’ll reach the moon. However, if you put your car at a constant speed, you’ll stay on earth.

Mathematically, this is how the two concepts are different:

Warning! Like I said earlier, reading the “What is a spring?” section is essential to understand the vocabulary of the following part!

Hooke’s Law is a general law that applies to almost all sorts of springs. It is expressed like so:

⁣ ⁣ ⁣ ⁣ k is a constant, the stiffness of the spring;

⁣ ⁣ ⁣ ⁣ x is the displacement vector, or in other words, the length and direction from its equilibrium state.

Since Hooke’s law is a general law for physical springs existing in real life, and not for algorithm springs, we’ll add another law: Newton’s second law of motion, which is expressed like so:

⁣ ⁣ ⁣ ⁣ a is the acceleration of an object.

And with a little bit of algebra, we isolated the acceleration. This is the value we’ll use to get the spring to work. And if you don’t understand the equation, in English words, this means “acceleration = negative stiffness × distance to center ÷ mass”.

For some experts in springs, you can already compute mentally the code for executing the previous math equations. I’m going to borrow your knowledge and put it down below for everybody:

And… let’s discover together if this works!

Well yes, it surely has a wonderful spring effect, but how’s the animation not stopping? Simply we didn’t add damping in our code, the force that opposes the current movement and direction - let’s fix that!

⁣ ⁣ ⁣ ⁣ s is the speed of the spring.

And if we add this is our acceleration equation, we get this awesomeness:

And let’s modify our previous code…

And… let’s see how well it turns out!

Woah, pretty insane, right? However, you might have noticed something from the beginning - this spring is unidirectional, and in most cases you want the spring to act bidirectionally. Let’s code that together!

I made multiple tests and the most efficient way to make a bidirectional spring is to have two distances (x and y distances), two accelerations (x and y too), and two speeds (x and y). But not two positions because we’ll enter into a quantum world lol.

Woohoo, that’s insane! We made it! We made it! Now, let’s move together our huge knowledge package in a Hopscotch project!

Everything in a Hopscotch project

To understand this section better, if you haven’t done it yet, I strongly suggest you read the “Coding a spring” part because in this part I assume you understand what I am doing. If you have already read that part, nice! Let’s move on. 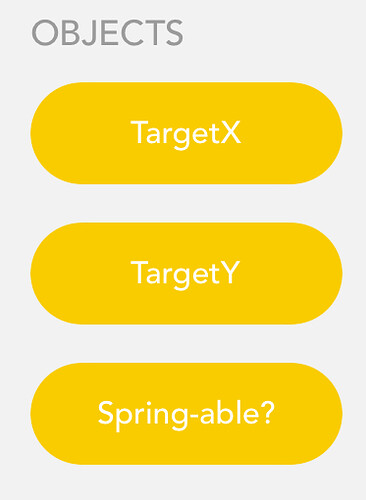 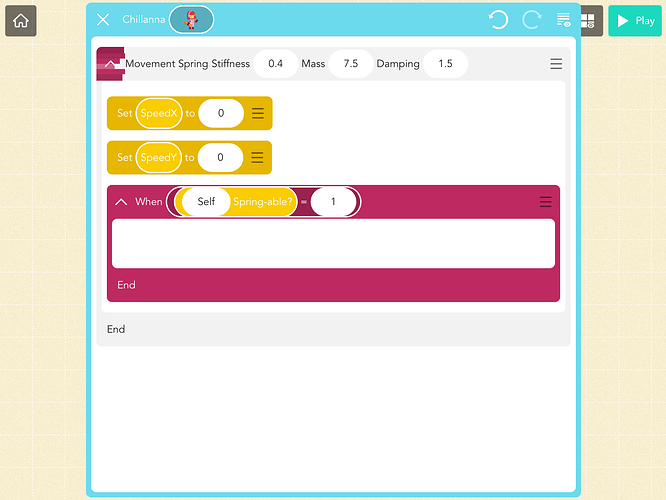 In a new object, create these three object variables. Then, create a custom rule with the Stiffness, Mass, and Damping as parameters. Inside it, declare the local variables SpeedX and SpeedY. 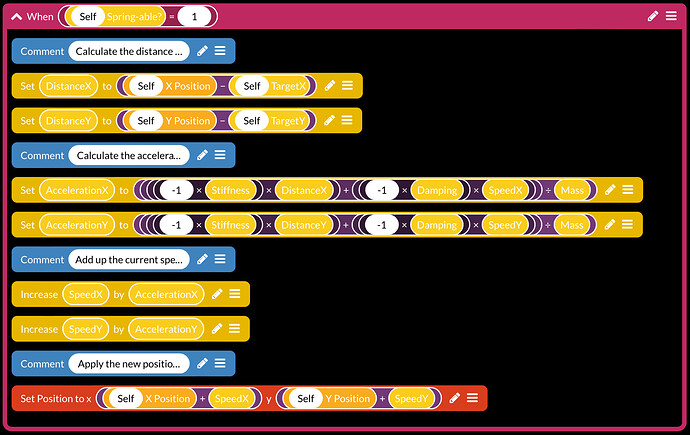 Add this short code in a When Self Spring-able? = 1 container. You can ignore the comment blocks, they are not important.

Your spring physics should now be done. You have in your backpack a universal code extension, and you can apply the physics to whatever clone whenever you want.

In order to activate the spring animation, there are two steps. One, adding the custom rule in your object. And two, setting the variable “Spring-able?” to 1. Step number two is useful if you use clones.

From what you learned earlier, you can easily change the parameters of your spring using Stiffness, Mass, and Damping. The numbers shown on the screen are examples, a mix of three that I like.

And finally, you can change the spring target wherever in your code, and to whatever value you want. As an example project, I set it to follow the finger: 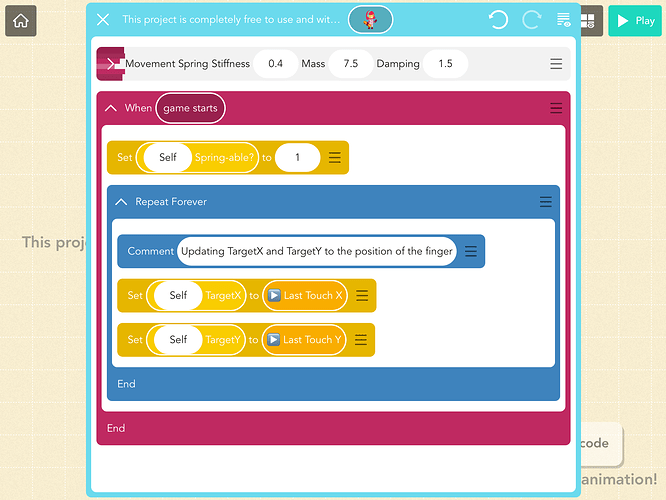 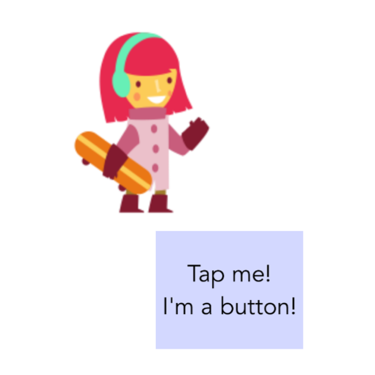 “OSC2: Springs” by Tri-Angle. Made using the free Hopscotch app!

Drag your finger across the screen and watch the beautiful magic! Small extra: I also made a magic spring-based button!

This project is also a submission for Hopscotch Innovation Contest under the Code Snippet category.

Hey, I’m sorry that this was a long tutorial but I believe you understood this is very very useful. As always, like subscribe comment I mean this tutorial is completely free-to-use and you don’t need to give credit if you don’t want to :) super excited to see what y’all make!

This is the best tutorial I have ever seen. Great Job, Tri-Angle!

thank you so much :)

There’s also a thing in springs called elasticity, or the “ability of a deformed material body to return to its original shape and size when the forces causing the deformation are removed.”

The way your springs are now is just perfect. It don’t need no ELASTICITY!!

Awesome! Great job ‘Flank Guard’ > @Tri-Angle! lol I might use this in a future project!

Tri, can you change my tag?

@Crosbyman64, I have a question for you, do you think it would be possible to intergrate spring into platformers? If so, would you mind trying?

And you also need to change @moocow ‘s

do you think it would be possible to intergrate spring into platformers?

What kind of spring?

The one chillanna has in the example project

Are your fingers still on your hand /j

Is there a way to request topics that you could cover in the future?

Nice tutorial, I can’t understand EVERYTHING but it looks well made

Tri, can you change my tag?

And you also need to change @moocow ‘s

Awesome! Great job ‘Flank Guard’ > @Tri-Angle! lol I might use this in a future project! 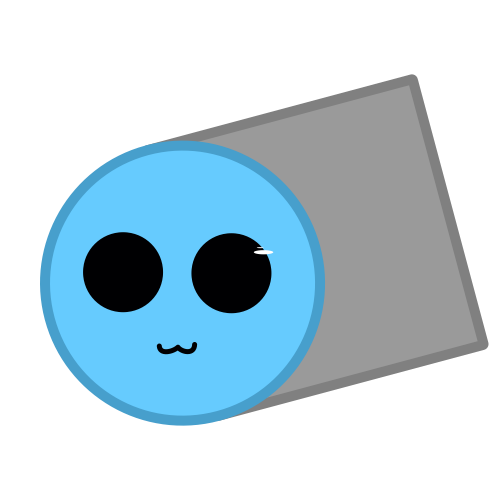 @Crosbyman64, I have a question for you, do you think it would be possible to intergrate spring into platformers? If so, would you mind trying?

it will possible - for moving platforms and instable platforms

it looks like you signed up for it - basically, each month, i post a big tutorial about a hopscotch trick, and everything is free to use if you’d like to use it! :D

Is there a way to request topics that you could cover in the future?

Nice tutorial, I can’t understand EVERYTHING but it looks well made

Lol, my all time favorite joke

Lol, my all time favorite joke

Maybe Tri could actually make a YT video for these open-source courses.

yep, i’ll use it when i’ll be coding the tile physics in my platformer (still coding the level editor haha)

I thought “why is this poll average so low?”, then I realized it was out of 5. Still pretty low for something with this amount of detail.

yea i personally think there’s absolutely no difference between 8 and 9, 7 and 8, 6 and 7, etc etc so i simply go with 12345.
it’s low probably because this one is a long tutorial :P

Nice Typo in the topic title

thanks for catching that lol

Maybe Tri could actually make a YT video for these open-source courses.

there were actually 28 people voting for yt video with voice, but before making one i should:

so i wont atm make videos, but def will if these three conditions are met :D

right, got it now