[OFFICIAL] How did you find out about the Hopscotch Forum?

Hey Hopscotchers! We would like to know how you guys all found out about the forum. There are two polls below. The first poll is public, which means we can see who responded to what. The second poll is private, so nobody (even us) can see who chose what. If you chose other please explain how below!
@omtl

Do you still use Hopscotch (public)?

I think someone posted something on Hopscotch, but I forget.

I found out about it when tht first announced it in their project.

I found out about the forum through the Hopscotch Team inviting me to beta test it.

I found out after a certain person told me about it the day after they got it.

I found out about it randomly on google

I found out, because TDO and TEM told me.

I joined the forum when THT advertised it in a Hopscotch project, which was when it was brand new actually! So, I have basically been here since the beginning, but with a period that lasted about a year and when I kind of forgot about the forum (after I registered basically)

I saw that project, but I forgot about the forum until about June/July 2016!

So you did the same thing as me basically.

yee kinda! I remembered it as I saw another user make a project about it, so I put that down instead as my choice!

I think because THT announced it on the app

Also, you might want to add a space after the “[OFFICIAL]” tag in the title 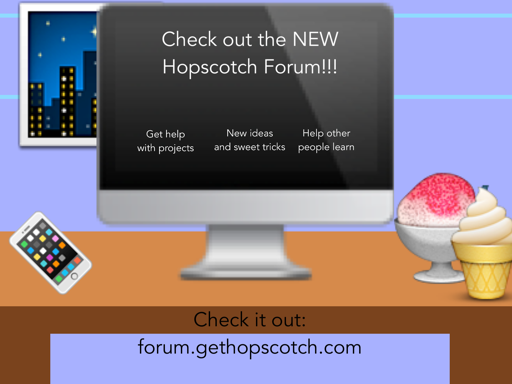 “NEW HOPSCOTCH FORUM!!!” by The Hopscotch Team. Made using the free Hopscotch app!

What was the first topic on this forum? I’m just curious UwU