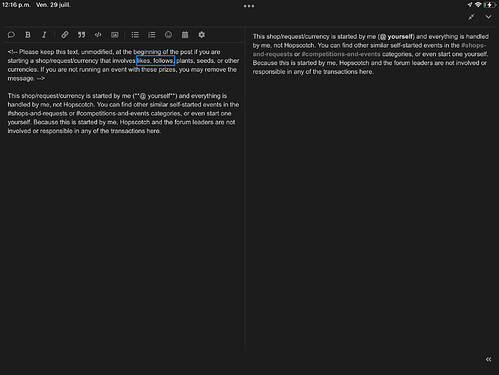 wait we can still sell likes and follows on comps?

I have an idea for a forum game

Like someone tells part of a story and then it gets to a part where a character has to make a decision, and instead of the author picking for them there could be a poll so the community could decide what happens next sorta. And then maybe the next day or in a week or however long there’s an update, the character makes the decision that has the most votes and the story continues a bit til there’s another decision, another poll, etc. idk how much planning this would take or if it’s even possible but I think it’d be really cool to see

There are 2 custom fields, the Hopscotch Username Field and the Pronouns area.

Today I suggest a Nickname Area and a Extended Bio area

What if you would like to call someone their nickname, and you didn’t know it. You could tap on their profile and see it

The discourse bio is only 3 lines, I’ve seen some suggestions about this and a solution is to allow people to have an extended bio

People have suggested the first one before but cool!

Generally, I feel like anything not covered by the existing fields can be put in the bio, but I’ll bring up the idea since it has been suggested this many times. Not a bad idea!

The discourse bio is only 3 lines, I’ve seen some suggestions about this and a solution is to allow people to have an extended bio

It is possible to extend this but being able to condense text into a short character limit is also a very useful skill to have. I think this was brought up before but didn’t go anywhere.

pretty sure that’s me - the best way is that the number of line shown could be customizable in our profile settings, but i don’t know if discourse offers that option

Discourse doesn’t, but I don’t think it should be different for everyone either. Thanks for the suggestion though!

in addition to this, perhaps a #solved or #fixed tag for bug topics that have been solved?

That’s what the solution button is already being used for

Pronoun badges that you can fabricate to show your pronoun

(These would have —Can be used as title enabled)

Introducing: Pronoun groups! Hi Hopscotchers! Earlier this year, we introduced a pronoun field for your profile where you can fill out which pronouns you identify with to help other forummers know what pronouns you use. Now, we’re making it even easier to tell other people your pronouns: with joinable pronoun groups! After joining one of the pronoun groups, you will be able to go to your profile settings and set a title. A title will appear right next to your username in all of your posts. An…

We already have the groups and user field for this, and I don’t think we’re going to open it to badges because we would have to grant every single one manually, which I think is already more work than combining titles for those that are applicable


New forum game: Find the opposite!

Here’s how it would work.

Someone would start by saying the name of something.

Then the next person would say the opposite!

Then they would say the next word someone would have to find the opposite of.

Someone doesn’t need to say what the other person was thinking of. For example, Awesome_E thinks the opposite of land should be water but StarlightStudios replied with air. (This rule could be changed, I’m in the fence about it)

What do you think?

Seems pretty cool – we’ll put that in consideration. Also there’s usually a time gap between games (so it can be a while)

Idk if you noticed, but on discourse the theme i s different. This theme is removed, maybe add it back? 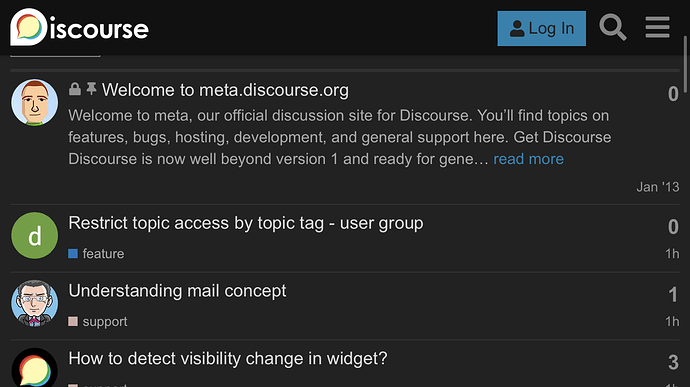 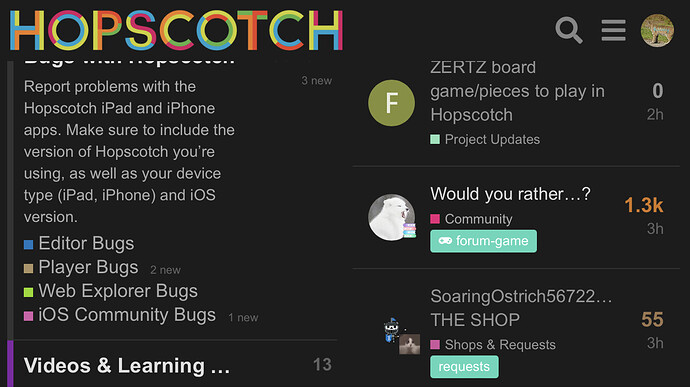 Not sure what you mean by “add it back”? You’re showing the latest view on Discourse, and Hopscotch has this too if you switch to it on the top. Or do you mean something else, such as the visual cue that the header bar is separate from the body?

Latest and categories are both together in hopscotch

Yeah, you can tap on “Latest” to only show the latest topics (same as your screenshot of Discourse Meta)