Not a number "NaN" and "Infinity" make the number keyboard appear

Use this template to make NaN bug reports:

But instead this happened: not a number is a number

It might be recognizing it as a “Not a Number” Error Code.

Hopscotch’s webplayer uses the programming language JavaScript, which (ironically) considers “NaN”/Not a Number to have the same type as “regular” numbers. This means that it is the same for everyone using the language, but it is still possible that THT could implement some checks to get around this since JavaScript contains functions for checking if a number is NaN. I’m not sure what they currently do, though.

Here’s a demonstration of how JavaScript treats NaN. It’s a bit technical but some may understand:

NaN in JavaScript is considered a number because statements like "hello" * 839 still have a to return a number, but JavaScript can’t multiply with strings and still end up with a number. So they return NaN.
But this is hopscotch and JavaScript features shouldn’t be used, tht should probably make a workaround for this lol

True, but some HS coding can fix that

If the number under the radical is less than 0, then return as

So I guess what is going on is that the numeric keyboard pops up for NaN, since it considers it to be a number.

Since NaN is considered a number type in JavaScript, I think it is not really unintended behaviour, so I will close this topic

This topic was automatically closed after 16 hours. New replies are no longer allowed.

While NaN is considered to be type number in most programming languages, Hopscotch doesn’t really have an intended way to show NaN, and the player parses it as a string type [1], not a number type. This should be consistent in the editor.

Should this be closed? Again

Well, if you type NaN into a parameter, exit it, and tap into it again, does it show the text keyboard?

No, the number keyboard.

Then the bug still occurs and this should stay open 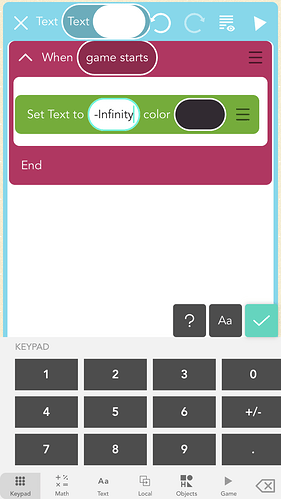 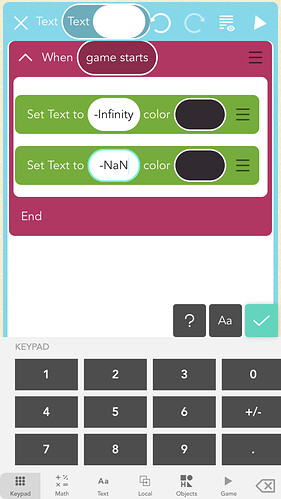 Works with infinity as well.

I think this behaviour probably makes sense in the editor, since they are number types.

The bug/unexpected behaviour is in the player, which should treat NaN as a number. Perhaps a separate bug report can be made for this issue in the webplayer.

While NaN is considered to be type number in most programming languages, Hopscotch doesn’t really have an intended way to show NaN, and the player parses it as a string type [1], not a number type.

So, does that mean we want to parse the strings NaN and Infinity as numbers if a user sets variables to those strings? If that’s the case, I agree and we should file an issue in the webplayer for that. Otherwise, if they’re still going to be treated as normal strings when a user enters those, then the bug is in the editor.