How to make a simple FPS counter

Here is the link to a simple FPS counter 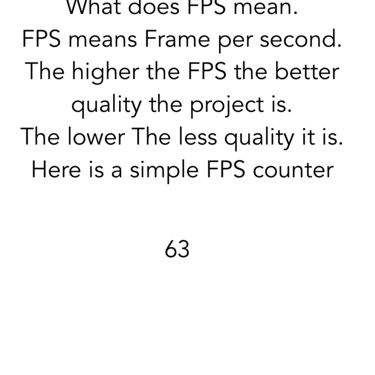 How to make a simple FPS counter by RoadOcean

“How to make a simple FPS counter” by RoadOcean. Made using the free Hopscotch app!

(The project explains everything)

Cool tutorial, thanks for sharing!

Great tutorial, and it works great. 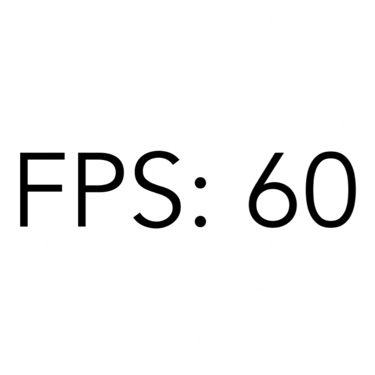 That’s because it’s to compensate for the 2 extra frames it takes for each loop.

FPS (Frames Per Second) will depend on your device and the operations being done in the project. Lag occurs when operations take more than 1 frame (16.66666667 ms) to complete.

This can happen due to massive cloning, attempting to do lots of operations on multiple clones at once, etc.

It can definitely be done that way. I just did it in simplest form. (Evaluating math operators in AE’s project builder would’ve done the same thing).

I just did it in simplest form

Yeah I guess the main thing with changing the Wait block is that if each frame does not take 1/60 seconds to execute (e.g. it takes longer because of lag), then the frame rate would not be accurate

It stabilized at 60 FPS on my iPad Pro, and when I enabled Low Power Mode (as I knew that limits the device’s FPS), it stabilized at 30 FPS (as expected).

The best example of lag I came across was the massive lag that occurred from bringing multiple clones to the front every frame. The frame rate started out fine, but then started dropping significantly (it was gradually getting worse). I experienced this while playing Spy Guy 96’s Perilous Parallelogram project a while back.

Another thing about FPS:

Low FPS means the project is very choppy (meaning there are pauses here and there that are too hard to miss), aka very laggy. The lower the number, the more laggy it becomes. Sometimes, when it gets too low, the program will just straight up crash.

I just made a little video of a method I just learned.

I’ll post it once CatBox is up again (502 Bad Gateway Error).

Hmm… looks like Catbox is going be down for a long time. Hopefully I’ll be able to upload a video by tomorrow…

When the flag is clicked, the timer is reset, a variable, in this example, “Previous Timer,” is set to 0 and and a forever loop starts.

Cool, Welcome and thanks for sharing.