It’s not the lead’s fault how the forum is run. They are taking directions from others, and probably are very strictly patrolled

Ok
What about “negative posts?”

I think there needs to be a big change, mostly involving one thing in particular:

We see the word all over the forum, trust levels, not enough trust in us, all of that. And really, it is a growing problem. As a user’s trust levels increase, they’re supposedly trusted more. It’s in the name, right? But it’s not what happens. The gap from member to regular is a large one to cross. One hundred days, a certain amount of activity, mainainimg that for a certain amount of time. It’s no easy task. So really, one would think that the trust in a user that puts that much effort into helping out the forum would be trusted more. But we aren’t. We have a few more responsibilities, some small perks, but no real trust. We aren’t allowed to know anything happening “behind the scenes”, our posts still get portalled if we talk about anything different, and we’re treated the same as members.

And then there’s the gap from member/regs to leaders. It’s not so much as a gap, more of a canyon. Leaders get the trust. They make all the calls. They get to tell us that everything we’re doing is wrong. They get to not tell us what’s going on “behind the scenes”. And we’re supposed to trust them too. Unconditionally. If they make mistakes, it’s okay. But if we make mistakes, or interpret a rule differently than a leader happens to, well you’re in some deep trouble. The leads interpret the rules without making it all clear from the start — and somehow that’s our fault? It’s all a lapse in trust. I think that system needs to change, and soon.

Very well said. Regs really are the same as members. They just get more likes, a title, and one topic in the lounge.
I’m going to read old posts and figure out when that trust lapse even started.

They get to not tell us what’s going on “ behind the scenes ”.

Idea: monthly/biweekly update on what’s really happening behind the scenes. Absolutely confidential things could and should be kept secret, and new projects could just have a short teaser in the post.

So I’m 64 posts into the beginning of this topic, and it seems like the first issue was the editing posts where everyone could tell a lead had edited it and why. That’s been resolved. The next issue seemed to be how it is hard for both younger and older kids to coexist in a place without being dissatisfied with more or less restrictions, which completely makes sense. But are there even younger kids here anymore? 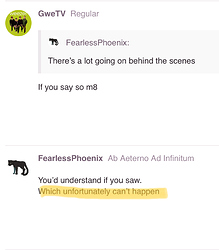 image749×854 134 KB
@FearlessPhoenix, I’m curious. Is there any particular reason why that can’t happen?

The leads have this topic on mute apparently, so fear wouldn’t respond

The Leads probably have a good reason, but it would be nice to have some transparency

Well said. I agree but not with everything. There is a reason that Ana chose them, and they have her trust. But I do agree that the “canyon” between member/reg and lead is quite large.

It’s not if there already are, it’s that there may be.

The short teaser of new projects would just get people to complain when the new projects aren’t ready “soon enough” or don’t ever get finished.

Hey there,
Trust is a fascinating topic; let’s discuss it.
So now that you outlined what’s wrong, please write down how do you see it changing. Start from what would be the criteria for trust levels.
I’d also love to hear how you personally helped the forum recently.

Hey there,
You have some interesting points here. Let’s discuss them one by one.

You are right, you can express your complaints and concerns in a polite manner in this topic.

Thank you, we’ll discuss it with Fearless.

I don’t, and that’s what’s a hair annoying. Even if the leaders/mods just said “we are trying to communicate with the user,” that would make me satisfied because I know that an attempt to communicate is being made and that’s always a step in the right direction.

Before doing anything, we send everyone a message asking to clarify things.

This is good, but when there is a spamming issue usually I just clear my notifs, and the tag to the message is never looked at by me. (Am I interpreting this right or is the message like a conflict res instead of a mass tagged issue announcement?)

However, in some instances, while we are waiting for a reply, we put people on hold, preventing them from causing any more disturbance.

What do you mean by “putting people on hold”? Does that mean they can’t post, and hence can’t reply to the leaders?

Not talking about leaving.
Because in most cases, it’s attention-seeking driven.

True, but I have seen more cases recently where the user actually left. There still is a higher probability of it being attention driven though the gap is shortening.

The majority of users come back in the next few days or weeks to ‘check out.’ Do you agree or not?

Yes, though as I said before, the gap is shortening from how often this used to happen

And if you not, we can test. We’ll allow people to say that they are leaving on a specially designated topic. But, we’ll close accounts of those who want to leave for 6 months to avoid false “leaving the forum.”

If I’m getting this right, you’re saying the account will be closed if the user says they are leaving for 6 months or less. This would certainly be an interesting test though the consequence would be a little harsh. I dunno if this would be a good idea or not.

Thanks for listening to the concerns, I appreciate it

I don’t, and that’s what’s a hair annoying. Even if the leaders/mods just said “we are trying to communicate with the user,” that would make me satisfied because I know that an attempt to communicate is being made and that’s always a step in the right direction.

I’m the one who sends the users private messages. With all respect, I don’t have to report to you about such things.

What do you mean by “putting people on hold”?

When we put people on hold we send them a message to an email attached to their account. They respond to my email ana@gethopscotch.com

I dunno if this would be a good idea or not.

What consequences? If people are leaving they are leaving, are they not?

Hey there,
You have some interesting points here. Let’s discuss them one by one.

of course, i completely understand the drive to keep the forum coding focused and positive all of the time! but i also understand the point that’s made when it’s said that it can be a little over enforced that we shouldn’t talk about something that recently happened that’s not only (1) confusing to the members of the forum if they weren’t online when it occurred and (2) something significant that went on. once again, i totally understand why this exists, but i also think that sometimes it’s a bit too tight.

I hear you, and I will think about it more.

However, right now, when users start to discuss such events, it comes across as a very idle conversation, almost gossiping. And we don’t want that on our forum.

If you ever have any questions, please write to me at ana@gethopscotch.com. I’ll be happy to clarify things.