[“details=please open only if you’re a hopscotch administrator; trying to value others’ privacy”]

Hey I have a concern about the Remodeling Coding collab- don’t get me wrong I think it’s a great collab. And you can clearly see that the people apart of it are well invested in @petrichor’s story and well natured. Even I think the collab seems like fun.

However some of the questions on the main post and the posts following it…seem a bit violent, to the point where they’re a bit uncomfy. I tried playing along with it at first; but one of the questions literally asks if you ever destroyed a building before. Clearly, I would assume this is a joke. Still however, it doesn’t seem appropriate for a coding app full of children. If fish “dateing” isn’t allowed, then how come violence and terrostic questions are? I agree with the decision to edit the fish topic, and I’m not trying to have any unnecessary drama. I just wanted to tell you guys about it.

Thanks, and again I don’t mean anything by this. I think the people running he topic are great and it was mostly likely just a silly mistake.

Also sorry about the kindness squad fiasco; I didn’t realize there was already a topic for it.

is this about the remodeling collab or the fish thing competition?

ah, i can totally see what you meant now, and no worries, i was just a tad confused lol.

yeah, that’d probably be a better way for me to have handled it. i’ll keep that in mind the next time i have a concern or whatnot regarding the forums ^^

They gave a reply of yeah sure you can use it. Its great that you actually coded the system. 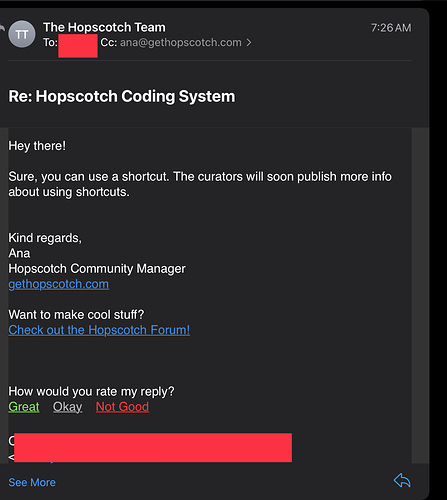 The “more info” bit is out now in the nominate your project topic btw, if you’d like to go check that out

Yeah. I don’t make those projects just to get curated. I was using them because I was wondering, how much effort do I need to put to get a 250 x 500 pixel art?

I got my answer. 3 minutes.

Leaders Q and A Topic

*gentle poke *
might i suggest that in the event this kinda thing happens again, this could be answered by another mod / lead and give an answer for this, even if it’s something along the lines of “ we don’t have an answer for that at this time, but we will attempt get into contact with [ insert leader / mod here ] ourselves. “

like i said in the OP ( original post ), it’s perfectly understandable if things have gotten into the way of the NT topic or whatever else, but i just wanted to give a gentle poke that hey, this question still doesn’t have an answer to and since this topic does move at a decent pace, these kinds of things do happen to be missed sometimes ( and understandably so ).

the fact that a couple leads have faved this post, indicating that they’re at least seen this post once, and yet still do nothing to talk about this is concerning. i took Ana’s suggestion on making a suggestion, even in a ( somewhat ) negative situation like this, but there’s still no response from anyone, let alone Serenity despite posting some art in the Inktober topic less then a week ago. it feels as though the leads / mods are avoiding this on purpose, which although we can only hope is not the case, it’s starting to feel like it seeing as some of the leads have seen + indicted that yes, they have seen this post, but continue to remain in silence as the community waits for an answer.
i do not intend to be harsh when i say this, but if Serenity is well enough to post her own art on a separate art topic, which takes time and effort to do, i’m certain that she ( or any other lead for that matter ) can fully well answer this + get the NaturalArt topic started again.

i highly doubt that they’d answer this anytime soon, seeing the way it’s been handled thus far. besides, two of them even indicated that they’ve seen the post by liking it, so i’m sure that at least some of them are aware of what’s going on

You’re doing a good job of waiting, it’s probably that Reni may have something in secret planned for it, or may be too busy to put something together, since going through the entities and all can take time! besides she’s currently busy atm, it’s probably going to be a super intense week for her so try on fri or so?

Is there a way I can change my name on the forum?

Yes, you can, but you need to have visited the forum 365 days.

I’ve got a looong way to go

you can ask a mod (Ana, reni, cm or pumpkin) to change it whenever but you have to wait at least 365 days for another name change

@TheCMStudios can you change my name to