Not being impatient, just curious:

When do all of the beta sessions end?

We’re ready to beta-test the next version of Hopscotch on a larger scale! For this round, you will get an invitation to Testflight, and you will have a chance to help Hopscotch debug the upcoming version. If you’re interested, please sign up by filling out this form or email me directly with your Apple ID email!

I will add anyone who signs up to a private beta testing topic so you can report the bugs you found. 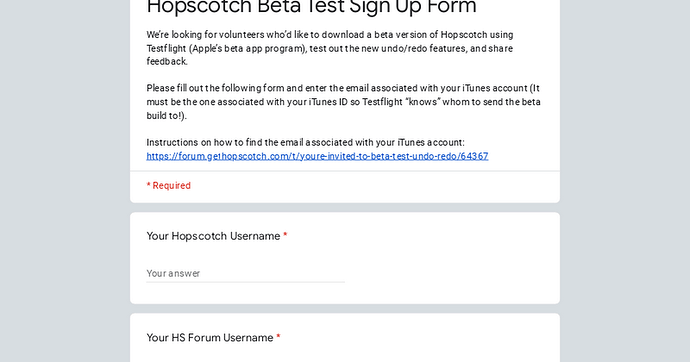 We’re looking for volunteers who’d like to download a beta version of Hopscotch using Testflight (Apple’s beta app program), test out the new undo/redo features, and share feedback. Please fill out the following form and enter the email associated...

Cool. I just signed up.

I am also on iPadOS 16.1, so I might encounter some bugs that other may not…

Is it me, or does the description for the beta sign up look familiar?

IDK. Only the people in OMTL2 can view it tho…

It was created when the original tag group got too large.

yeah, but isn’t that kind of the point of it?

also if omtl2 serves the same purpose [which i’m assuming for now, until someone tells me i’m wrong], and no one can view it, how does it get more people in and get omtl2 widespread and, y’know, a mass tag list?

Group tag lists have a limit on how many people can be in it, hence why there’s multiple.

i am already a beta tester, so could you directly add me to the topic please? thx :)

Can’t wait to see you there.

Yeah it isn’t for undo/redo anymore, but it is for new features

Cool. Can’t wait for this beta round to start.

Is this app something we download from the App Store?

Yes, you can download TestFlight from the App Store. You must be 13 or older to use it.

ngl but Nobody nobody cares abt that warning lol

Not the user, I’m presuming…

My apologies for sounding impatient, but when does this beta test round start?

A most esteemed and glorious group, that is beautifully well-named! I myself applied several times to join this group, which has the greatest name of all groups, but was rejected from the most honorable and amazing group that is so intelligently called omtl2. Words cannot describe the sheer amazingness of this group, the awe felt by those who see it, the beauty of its name! Truly, few are worthy of joining. And though I begged and pleaded the most honorable owners of the group to permit me membership, they forbade me. So: ask not what omtl2 is, and especially not with such disrespectful words as “goigly.” Rather: ask, no, BEG, most respectfully to join the most glorious and erudite and highly esteemed group that is so wonderfully omtl2.

HOWEVER: be forewarned that even if you provide two very long posts requesting to join the most wonderfully named omtl2, you may still only get a response from the leaders saying that they will “focus on reviewing them soon,” followed by a closing of the group to all applications. Do not be disappointed when this happens, for it happened to me too. But that was many years ago, in the distant realm of 2020, when the most wonderfully named omtl2 was first created. Perhaps you may have more luck, but beware! the leaders guard membership of this beautifully named group (omtl2) most jealously, so be prepared to perhaps even do battle to prove your worthiness!

And leaders, I now ask for a third time to join this beautiful and most esteemed and well named group, the only one so far to have won the coveted Great Group medal! I give the following reasons for allowing me to join:

So please, O leaders, hear me and allow me into the most well named Great Group that is omtl2!

I offer you three days to deliberate among yourselves, O leaders, and respond to me how you see fit. If it takes longer, that will also be acceptable.

My apologies for sounding impatient, but when does this beta test round start?

Either at the end of this week, or next week.

He signed his name
Ban him /j /lh /jk

This whole thing is quite a compelling topic