congrats, you got one of the most talked about games on the forum.

Multiplayer games really are something, I tell you. When I first did the soccer balls experiment, it was the same thing. I love seeing multiplayer in action, and hopefully this is the start of something big

I think 2.5 minutes is the right amount then, since the next shorter time limit would be 15 seconds (which also means if the project runs at 120FPS, say, on a high refresh rate screen, it will be 1.25 minutes)

A couple of updates today:

Open to questions with the exception of asking what the secret feature is :)

I am in the poll, my pfp is just invisible.

Small update: undo is working
(Usually I’ll tag the update group when I have a set of features complete)

NOTE: This poll’s title is supposed to be: “How much would you prefer this behavior to having the whole thing redraw every time you undo?”

I do not even know how that can be possible. because every time you switched layers you would have to redraw when drawing

For most, if not all, of these actions, it just shows you an indication that the trails you see aren’t accurate to what the layers show, and that you’ll need to redraw them to display properly.

So yeah that’s true, but if you want to focus on one without distraction, I think it could still be worth it

Update: A weird behavior was causing the both smooth and regular pen to draw at 30 FPS. This bug has been fixed… in probably the weirdest way imaginable 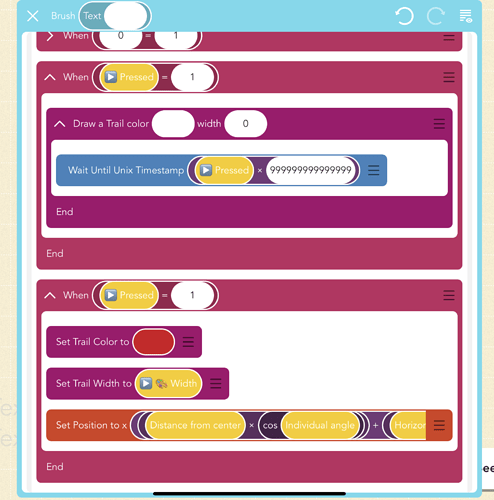 Draw a trail runs at 30 fps max with no edits- really weird solution, but I guess you draw a nothing and draw a something?

Basically when you enter the trail block, it puts the pen down (starts trail), and when you exit, it lifts the pen up (stops trail). So I wait until the screen is no longer pressed to release, but I set position every frame

try not to bump topics with autoclose timers :)) you could ask questions like this in ytaco, so that it autocloses if no. for example with this, in the ytaco, you could ask:
hey @/awesome_e, i saw your update topic for drawing pad x, and it hadnt been used for a while but it had an autoclose timer. should i leave it or are you updating it?
hope this helps