So it was a fair ban? You made it sound like the auto filter system banned them for no reason lol

It would be handy to be able to comment on projects — it would make it easier to share feedback, and it would help with debugging too (don’t have to make several projects back and forth to communicate)

I don’t think necessarily that people would intentionally misuse the comment feature any more than it would happen from being able to talk with each other on the forum, with guidelines in place. But the volume of content to moderate would definitely be more.

A potential middle-ground option is we could embed comments from the forum for each project, from #project-updates. Mainly since Discourse has addressed a lot of discussion features and problems (e.g. quoting, flagging, etc.) and it does have the feature to embed comments, at least on websites.

I do agree that the forum is a bit too hidden in the app itself, and that there is only a very tiny fraction of the user base on here compared to the app at the moment. It would drive more people to know about the forum at least!

Would the project update topic be separate then the actual update topic and be it’s own topic for comments or the same?

I guess it just depends on what people feel would be best — might be easier just to have one topic for comments. In that case, I think a separate app feature that would be complementary would be to include update descriptions for each project, like this:

So heres an idea: Project update logs Basically whenever you update a project you have the option to add an update log. Then the update log button would be in the project to the left of the edit button. poll

Do you have a design for this, @StarlightStudios?

What do you mean? Like a image of what it would look like? I could make one up. 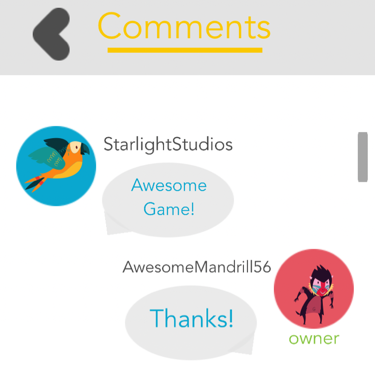 Comments in HS?!?! by StarlightStudios

“Comments in HS?!?!” by StarlightStudios. Made using the free Hopscotch app!

Omg comments are now in HS?!?!

I’m sorry they don’t exist I made a concept

show me how I can comment on a project without modding

oops i read roadocean post and got confused lel

I got confused lol sorry