I think a feature HS would really benefit from is comments. Being able to comment on other people’s projects could not only give good feedback to the developer but could potentially help build a community and fanbase for your games. Obviously, these comments would be moderated but I think this really needs to be in HS!

What do you think?

This would be INCREDIBLE!

The idea’s been in the air before, but it’s good to revisit. Last time I heard anything, it was along the lines of pre-generated comments, where people could choose from lists of phrases/words, so most of that wouldn’t really be a problem.

If you are looking for a concept, I do have a “reviews” section when you tap the info button on my modded player. For moderation though, you would post the rating and reply with a template somewhere in my web explorer topic. 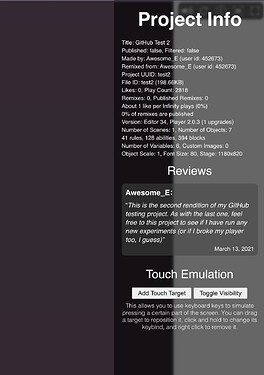 The moderators will have to be online 24/7

That could be fixed by making a auto filter system like in a lot of other apps.

If you make it so the developer could remove comments this could be fixed by developers removing these messages so the moderators wouldn’t have to all the time. (You could also add flagging posts which will temporarily remove them until a moderator approves it)

Messages that has no point

Could be auto-filtered and/or removed by a mod or the developer and could be flagged.

We already have a hopscotch forum

Very few people know about it’s existence as a whole, and this makes it easier for people to communicate about a single project and is in the app.

People might spam (this could be fixed by adding a slowmode)

Yeah you could add a slow mode

I must ask, what’s a slow mode?

I feel like nobody would really take the time to leave comment or read any comments. Also, it would take more time out of coding (which is the main purpose of hopscotch) for creators, who would spend lots of time reading comments instead of working on games. Besides, leaving a like says it all, really. If you have something to say that can’t be expressed in saying you like the project with a like, then you should just join the forum.

I really like this idea, but it can easily be misused.

That could be fixed by making a auto filter system like in a lot of other apps.

Though people can get around that easily.
Take scratch for example. Random comments that don’t have anything bad in the can result in commenting bans. Nasty ones can get through easily. Still, I think this is a really good idea but it could use some work.

That’s pretty subjective and just depends on the person

Also, it would take more time out of coding (which is the main purpose of hopscotch) for creators, who would spend lots of time reading comments instead of working on games.

I don’t think it will steal time from coding. Comments don’t take long to read and if people feel like coding they will code. If they feel like reading or writing comments they will do that. I don’t think someone who’s about to code will get distracted by leaving comments /lh

Besides, leaving a like says it all, really. If you have something to say that can’t be expressed in saying you like the project with a like, then you should just join the forum.

A like can’t give feedback, and a like doesn’t mean as much has someone writing to you that you have a great idea or you made something awesome. Also the forum doesn’t have many places to comment on projects and the amount of people on the app compared to the few on the forum is crazy

all of this would be fixed by moderation, but yes mods would have to be on 24/7
and i agree that we have the forum

Miss would still have to make sure no one bypassed it, but a filter in comments can fix most moderation.

I think a lot of people don’t know that the forum is really hard, like REALLY hard to find and it took me 4 years to do so. I didn’t even find it on-purpose. There is little reference to it on the app, the forum is not on the app, and to find it you need to go in settings which makes it hard to find. /lh /nm

Yeah. Some really good coder in scratch got banned because of stuff

they send you notifications about it every couple of weeks

Really? I haven’t seen any but maybe that’s because I’m on the forum. Idk how they would figure that all out though but I’m not saying your lying.

So you could appeal bans and a mod will unban you

I guess but that coder was bullying for really bad reasons so maybe if the reason someone was banned was extreme, either have longer time to be banned. And what is a mod? Wouldn’t people working in the hopscotch team be a mod

mod stands for moderator, the leaders with a shield next to their names are moderators. they would need different ones for this though.