oh yeah, you’re right. I remember when it was a single payment, rip

Interesting – if I have the time, I would probably check out what Godot has to offer

However: if you want to make your own game and dig just a bit deeper into the code and graphics without the need for a bulky engine, though, using a game library is an amazing alternative, and one that I would highly recommend you jump to when you get the hang of the basics of game coding. At this point, I’d recommend that you finish and upload at least a basic game in Godot or Unity, and then move forward from there to learn more.

I suggest against using MonoGame because, even though it’s also based on XNA, it has a really outdated content management system. (There’s a couple other reasons too that I won’t go over here.)

I had to do it for a school assignment and I agree that there are better engines indeed. It’s very barebones and a little complicated to wrap your head around. That being said, I was able to write a functional game in it, so if you like a challenge…

XNA is great! It’s definitely barebones but that makes it versatile. I just don’t like MGCP. FNA lets you use a Content/ folder in your project with .PNG file assets instead.

Interesting. It’s a little finicky but I didn’t expect that to be the reason you disliked it. How come?

There are a lot of old standards with XNA in general that are basically never used anywhere else, and have been outdated for a long time (content packing with .xnb, XACT audio).

SpriteFont is another example of a font system that is really bad, outdated and just doesn’t render that well. There’s a great article about it (that sadly, I can’t post here) but I’ll summarize it for you (these aren’t my words, they’re coming from someone a thousand times more qualified than I am):

FontStashSharp is the best alternative to XNA SpriteFonts as far as I know, and it seems pretty widely used.

The article also mentions how XNA’s content pipeline does things such as:

I simplified everything down to bullet points but basically FNA does all these things better! Plus it gives you easy access to drag and drop your assets into the file explorer instead of messing with the MGCP interface.

I still feel like everything’s unstable on my iPad Air 5th Generation because it’s so new and the slightly bigger screen. Everything just feels the little bit more unstable.

Yeah the M1 in anything is great, and funny story I had the iPad Air 2 which still gets updates to this day (not my main anymore though because iOS 14 changes slowed down HS a lot, though other changes in that were fine). It won’t get iOS 16, but 8 years of feature updates for a tablet is incredible!

Yeah no worries, now you know this is a space to talk about that 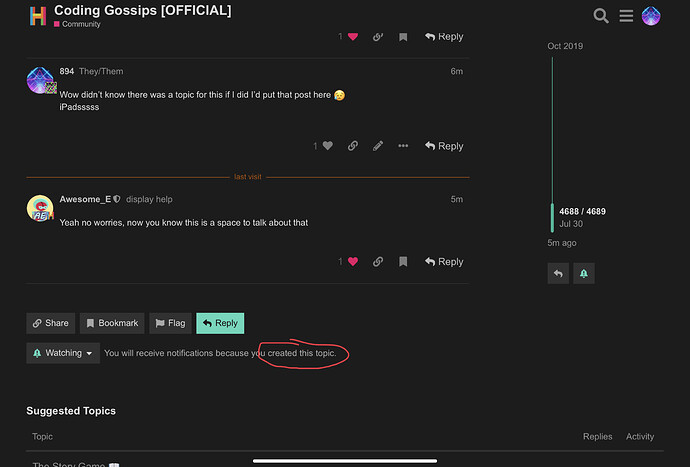 That’s weird. Usually it says “…because you are watching this topic” when you manually set it to Watching…

It was automatic. because awsome_e moved one of my posts from another topic that I actually made to here so that made it think that I created this topic

Try setting it to Tracking and back, and see if the glitch persists.

probably because they came out in the same year.

It’s more or less because the device is still supported (iOS 13 and newer). And it’ll probably still be for many years to come (or until the minimum iOS version for HS gets bumped up to iOS 16 (which releases this fall). Don’t worry, this won’t happen for another 5-10 years).

I think the original air has iOS 12.something because I couldn’t get the latest version of iMovie on it because that’s iOS 13 or later so I had to get an older version.

Yes it’s ok now I guess it was just a visual glitch!
Thanks @Crosbyman64!

I… I don’t think I’ve ever had this impulse before…
This conversation has made me want to look through the Discourse source code to find the cause of the glitch. :')

I don’t know how to feel about this but I think it’s pretty funny that I could do this sort of thing with open source software now.

I think its the same glitch that can make a solved post from another topic still be solved in another (ex. a solved topic into a topic that can’t be set as solved)