Characters between block no longer always returns a string

The “characters between” block has in the past always returned a string even if the value could be converted to a number. This is a very useful feature that makes many things much easier. However, in the newest webplayer, this is no longer the case. Instead, it will convert it to a number. 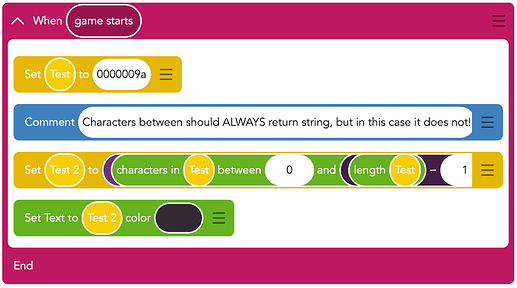 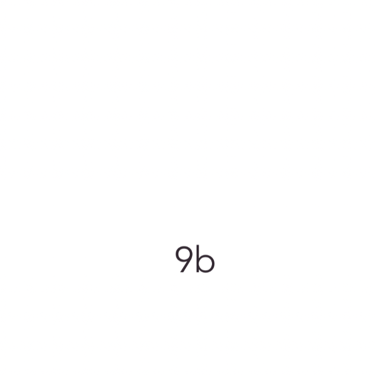 The expected result is that the object would set text to “0000009b” but it removes the leading 0s since it converts to a number (and back, which is probably not very good for performance) in between the characters between block and the concatenation, which has never happened before.

Is this intentional? If it is I think that it is very important that we get a way to use strings consisting of only digits as strings very soon.

Yes!! This is happening to me too!

it is very important that we get a way to use strings consisting of only digits as strings very soon.

If it is I think that it is very important that we get a way to use strings consisting of only digits as strings very soon.

Yeah this is not intentional — ‘characters between’ should get those characters in the string from the positions that you specified. We’ve added it to our list to fix.

Will this be fixed in time for the next spring competition deadline?

Unfortunately it probably won’t, I have added it to our list though.

Ok it looks like Characters Between is actually converting the string to a number, or cutting off leading 0s, before slicing it.

Edit: now I remember the original example in the post has “a” — I’ll just edit a screenshot so the steps are clear.

Please fix this bug it brakes complex projects.
Also do you have a dew date?

Any idea when this will be fixed?

we all hope as soon as possible- it’s still possible to work with string, however it’s pretty counter-intuitive and not easy to work with

personally, i think “character at index”, “character between” and “length” [1] should by default consider any number as string in their first input (just like the new update where any inputs in non-addition operators only allows numbers, not text)

Yes, that too. It would also be helpful to split the + block into + and a concatenation block, instead of having it be the same block, though that one would not be as good. And of course text blocks should always return text, unless it doesn’t make sense (length)

personally, i think “character at index”, “character between” and “length” [1] should by default consider any number as string in their first input (just like the new update where any inputs in non-addition operators only allows numbers, not text)

Yeah that would be the expected behaviour. Unfortunately it currently converts the first parameter to number for all of them

This returns a length of 1:

If I treat it like a string, it will return a length of 14.

Any idea when this will be fixed?

I’ve been investigating a bit. Currently the player seems to convert to a number whenever possible (like when setting the value of a variable, when getting the parameters for blocks, etc.) So it is a bit involved.

We can probably do it in a minor version update (as in bumping from 2.1 to 2.2, for example), since it might cause some unexpected behaviour with existing projects, where people have relied on the current existing behaviour.

I agree it is not ideal — it should convert to a number only if the block needs it, like @Tri-Angle mentioned with the blocks in the app

So there’s two parts to this:

There was a bug where “characters between” and other text operators convert their input to a number, meaning that leading zeroes are lost. There’s a fix for this in the works, coming out for player 2.2.0

For the case of joining 00000 and a, this is probably best suited for a separate “join” block — to concatenate/join numeric strings that have leading 0s.

We do have a ‘join’ block on our feature request list.

ahh that would explain things @StarlightStudios

Thanks for the notice, I will take that into account now hopefully this gets fixed soon.

I think the limit shouldn’t be 0-9 though, as numbers like 50 would still work I think and numbers like 51, 52, etc. I think if I kept stats at least two digits it should be easy to implement