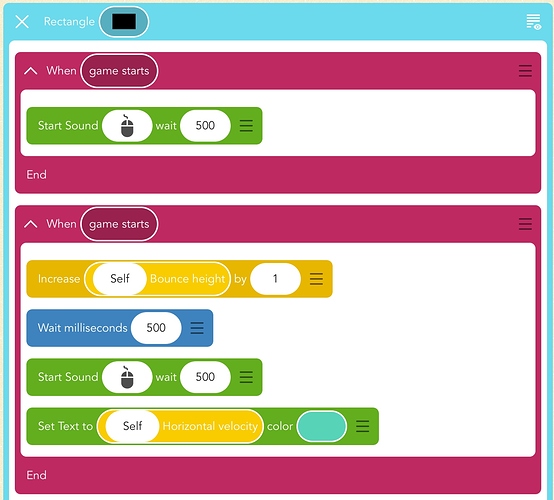 image1535×1384 179 KB
Bug: The first sound played in the project plays twice when it is restarted, but the frame happens once.

In my project, the first play works as intended. When I restart the project, I hear two first clicks without any delay, then the second click lays after 500ms.

huh, that’s weird, lemme see if I can replicate it

Could it be that you only need one sound block?

If you have one sound block, the same thing happens (put in game start)

Did u publish it?

If not let me replicate it and try it. But if u did then I’ll check out the one u made

No, just follow the screenshots in post 1. If they don’t do the same thing on restart, try it on an older, existing project then tell me here

In the future, I should also add a detail to my bug report about how serious the issue is. In my case, this would be a 1/10

i think I figured it out

hmph why do basics and new users not get 3 reply limit?

@Awesome_E I think I have something… the bug is the game starts. I tried “when is tapped” and added something to tap and it doesn’t double click

Yeah but it’s still a game starts bug. I din’t think it’d happen anywhere else but thanks for confirming that.

Yup. May have to ask Ana for Fox… I can’t do it cause it’s not a code bug it’s an actual HS bug

Interesting bug. As far as I can tell, it’s only upon pressing reply when the start sound block is the first block in a “game starts” rule.

I’m prioritizing bugs right now, can you give an example of a project where this causes a big problem?

It doesn’t cause a big problem, as it only happens in the “laggy frames” of a restart, so don’t prioritize this one over others.

Just something to be aware of later imo, but thank you for this focus on bugs, I really appreciate it